Following the agreement, Pocket users who are also Matter subscribers will be able to access the site’s long-form articles directly in Pocket, online or offline, using its Site Subscription feature.

“Millions of readers have made Pocket their default reading app, and we’re excited to help publishers like Matter make it easy for their subscribers to save and enjoy those stories anywhere, Pocket said.

Pocket’s Site Subscriptions feature lets users pre-register their login details for media outlets that require credentials, in order to let them save and read paywalled articles later. At the moment, the functionality is only available in Pocket’s mobile apps for iOS, Android and Kindle Fire, though it has plans to bring it to other platforms in the future.

As you may remember, Matter was launched through a Kickstarter campaign. While its founders were seeking $50,000 to get started, they ended up reaching that target in less than 48 hours, raising a total of $140,000. 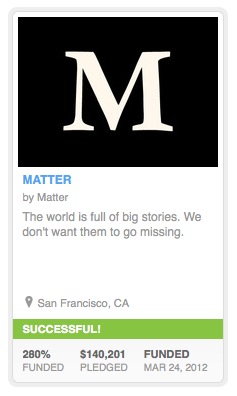 After weeks of preparation and fine-tuning, Matter’s first article went live last month. Called “Do No Harm,” this story by Anil Ananthaswamy focuses on a disturbing disorder: people who feel the need to have one of their limbs amputated, even though it is perfectly healthy.

While Kickstarter’s backers already have access to that article, other readers can now also pay 99 cents to get access to a package that includes a reading friendly web edition and an e-book version for their Kindle or iPad. Thanks to Matter’s partnership with Pocket, they will now also be able to read that story in the popular read-it-later app.

Matter and Pocket are a very good match, as many of the articles we store to read later are the ones that require a bit more time. This is exactly Matter’s specialty: deep journalism, as its team calls it (see our interview with Matter’s co-founder, Bobbie Johnson).

As for Pocket, it recently announced several improvements to its apps, by releasing updates to its Mac and iOS versions to make sharing easier. As we noted, Pocket’s choice to integrate with third-party platforms will likely increase its relevance in the long run.