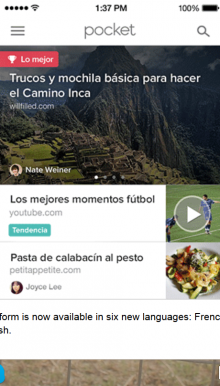 Pocket, the read-it-later service that lets you bookmark articles and videos from across the Web to read or watch later, is going well and truly global today.

Thus far, the Pocket platform has only been available in English. But now, the Android, iOS and Web app are available in French, German, Italian, Japanese, Russian, and Spanish. More languages will be added soon.

According to the company, more than 40% of Pocket users already speak a language other than English as their mother tongue, so this should go down well with its global user-base. And looking beyond mere translations, Pocket is rolling out integrations with more international apps and platforms – for example, with Yandex.Browser in Russia, where Pocket’s Chrome extension will come pre-installed. More will be announced shortly too.