If you followed the latest Mobile Premier Awards during MWC, you may have already heard about PlayTales, an e-bookstore for kids. The company made it to the global finals where it won the prestigious audience award.

While awards are always welcome, PlayTales didn’t need one to know its popularity; according to its CEO Enrique Tapias, its multi-platform app has already been downloaded 1.8 million times and has 350,000 unique monthly users, resulting in an average of 1.5m “readings” each month.

PlayTales is both an app and a bookstore; once you download the app, you get access to a children’s bookstore when you can buy individual e-books for prices that vary between 99 cents and $2.99. However, an optional subscription model is also in the works, Tapias says.

It’s worth noting that you don’t have to pay for your kids to give PlayTales a try; there are some free e-books, and you can also get a sample before purchasing.

Most of the books are available in several languages; although PlayTales was born in Sevilla under the name of ‘TouchyBooks’, it now has a small studio in Romania and commercial branch offices in NYC and Shanghai. It is a sign of its international ambitions, as PlayTales wants to become “the global leader in interactive children’s books”.

However, the inspiration for PlayTales came on a much more “micro” level; the father of three kids, Tapias witnessed how much they enjoyed playing with his phone and tablet, but he also wished they would read. This gave him the idea for PlayTales, which combines reading with activities – hence its tagline, “Where kids read and play”.

To cater to all age groups, each book offers three reading options: “Autoplay”, “Read to me” and “Read by myself”. It also includes several mini-games, such as ‘find 7 differences’ and memory games, as well as activities like coloring.

PlayTales Builder, open to all 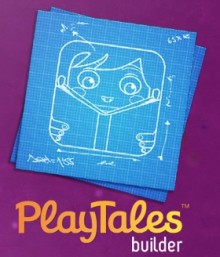 So far, most titles available in the bookstore have been developed by PlayTales itself. However, the startup is determined to grow its library. To do so, it has recently opened its platform to third-party developers. If their e-book is accepted by PlayTales, they get access to international distribution and receive a 70% share of the sale revenues.

PlayTales even developed a platform to facilitate the creation process. Called PlayTales Builder, it lets anyone develop an interactive e-book in exchange for a fee. The SDK is still a work in progress, Tapias acknowledges, and additional features such as 3D will be added later on.

➤  PlayTales, via the AppStore and other platforms