When you move away from your typical computer speakers and step into the world of studio monitors, the entire game as you have known it changes. Unfortunately, if you want the best of both worlds, you’re often stuck with having to have two (or more) sets of speakers in your workstation.

Let me explain why this is, for those who aren’t aware. Typical consumer-level speakers (especially computer speakers) do what is called “coloring” the sound, by enhancing frequencies, making the overall sound more pleasing. Conversely, studio monitors are judged on their ability to accurately reproduce sound, without coloring (known as “flat”), in order to allow audio production and mastering to happen.

Pioneer is hoping to bridge the gap with a new line of studio monitors that, because of additional features, also allow them to be used for “pleasure” listening, instead of just business. The model that I’ve gotten for review, Pioneer’s S-DJ05, features a 5-inch driver, 2.5-centimeter soft-dome driver, stand mounting holes on the bottom and, most importantly, 4 switchable input methods:

Now, as to why these multiple inputs are important — An ideal scenario would have you running the source of your sound directly to the output. In many setups, in order to get multiple input devices, you have to add a mixer (or other such item) into the chain so that you can switch between sources. With multiple inputs, you don’t have this problem. 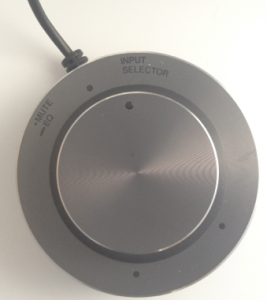 The other true beauty of the S-DJx system is with the wired controller. Pioneer has done a truly stunning job both in the craftsmanship and also in its usability. On the front, facing you, there is a power button. The back holds two more buttons, one for turning the EQ on and off, and then another for selecting the input source.

You’ll notice that I said EQ. In the case of studio monitors, equalization is typically seen as a bad thing. So why include it on the S-DJ systems? Simply, that EQ is what allows the speakers to bridge the gap between work and play. A set of knobs on the back of the speakers allow you to set the low and high frequencies, making for a more pleasurable listening experience when you’re not in “work” mode.

Ultimately, however, the test of any speaker is how it sounds. Does it perform in the way that you want? Let’s talk about that with the S-DJ series.

In work mode, the speakers perform admirably. Comparing them to other monitors in the price range (the S-DJ05 has an MSRP of $899, but you can find them for $699 at the usual suspects), you’re not likely to find many 5-inch versions. In fact, 8-inch models are common, and there are a few 6-inchers in that area. As such, it’s hard to draw a fair comparison because of the definitive difference in low-end response. 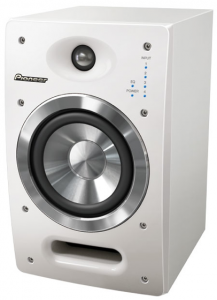 That difference aside, the 05s perform amazingly well, but you have to understand the limitation that comes from a smaller driver. If you can’t accept that, a step up to the S-DJ08 will set you back around $900. As far as the 5-inch version goes, however, I’m floored. Their ability to accurately reproduce sounds across a wide variety of music is astounding, though there does seem to be a bit of premature deflation in the response at around the 120 Hz range. Fortunately, anything above and below that however is reproduced with beautiful results.

Finished with work? You’ll likely be very pleased with the 05’s ability to serve as a listening station for your play time, too. I found them to be great for general music listening, video games and online video, as well as high-definition audio reproduction from HD video and music.

Here’s a quick promo video. While it’s obviously biased, I can say that I agree with the pain points that are addressed, and I can also agree with the general consensus of the people in the video.

To sum it up, Pioneer aimed big with the S-DJ line, and it has hit a home run in my opinion. I test a somewhat-ridiculous amount of audio gear, and most of it never makes it onto the pages at TNW because it’s just not up to the standards that I think our readers would enjoy. After a disappointing run with Pioneer’s DDJ-ERGO mixer, I was hesitant to give the brand another run, but I’m glad I have because the 05s are a brilliant example of cross-platform use in a stunning package.

Ultimately, since the speakers are great in what they can do, your decision as to whether you should buy them comes down to whether or not you need them. If you’re constantly flipping cables, have a mixer combining sources or just want to get rid of an extra set of speakers on your desk, they’re a hands-down winner. If you’ve ever fancied yourself a music producer, no single piece of hardware will ever be a more solid investment than your monitors. Do yourself a favor – start there, then get the rest.