I’ve always had a bit of a love affair with Pioneer DJ equipment. Since my earliest days in the clubs, working with an old built-like-a-tank DJM 500 mixer, I’ve had a lot of respect for the company’s ability to build gear that sounded good, worked well and could live up to a beating.

So when I was pitched the idea of Pioneer’s DDJ-ERGO, I was enthralled. The company had made a piece of kit that was directed more toward the beginner DJ. On paper, the ERGO controller and Virtual DJ LE software included a wealth of features and looked promising. So Pioneer sent one my way to dig in and find out the full story.

At first blush, the DDJ-ERGO could pass for any professional-level controller. At least from the top. The matte-black finish looks great, and the silver highlights are a nice accent. The device, however, is packaged in a white plastic case that I’m not overly fond of as it just looks a bit cheap to me but that’s all a matter of personal opinion. 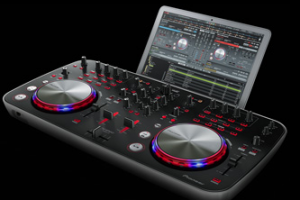 It’s big controller, measuring 21.8 in (W) x 11 in (D) x 4 in (H), a full 5 inches wider than my current Traktor Kontrol S2. The height is largely due to tall feet on the back of the device, giving the entire thing a slant, but allowing room for your laptop’s keyboard to slide underneath. It’s a good design, but feels to me like it could be slimmed down quite a bit from where it is right now.

The ERGO is powered by USB, requiring (and including) no secondary power supply. Plugging it in and turning it on, you’re greeted by a light show that, while it looks neat, doesn’t serve any other purpose other than giving it a bit of a “gee-whiz” factor.

When the included VirtualDJ LE software is running, the ERGO comes to life, providing reasonable lighting across the device. I say reasonable because it’s workable under dark conditions, but you probably won’t be able to see the light well at all in anything else. In my house, under natural light, it was a bit too dim to be of much use.

The lights aren’t just there to look pretty, however. Pioneer has done a nice job of giving visual feedback for beat matching on both lights above the channel volume controls and lights that move around the platters.

Across the back of the ERGO, you have a wealth of input and output options. I was pleasantly surprised to both TRS and RCA outputs, though there is no dedicated record out. It’s also worthy to note that there are both microphone and auxiliary input jacks, expanding the reach of the ERGO a bit further.

The plugs are all of good quality and feel quite secure. Even the USB connection fits a bit tighter than most, leaving you with the feeling that you shouldn’t be concerned with yanking the thing out at a critically bad moment.

Touch It, Feel It, Hear It

If you’ve used any sort of traditional DJ controller before, the ERGO is going to feel very familiar. Since you’re reading this, I’m going to assume that you know how these things work and you don’t need an explanation. That said, there are some tricky points to the ERGO’s feel.

In short, and it pains me to say this, the ERGO’s control surface just feels cheap.

A couple of high points do exist, however. The knobs feel really great. I prefer more rubberized ones myself, but even being made of hard plastic, they’re firm in their movement. Knobs without a stop point have solid-feeling detents to them, making adjustments more secure.

As for the sound, it’s good, if not great. The built-in sound card of the ERGO tends to over-emphasize the low end of tracks, but otherwise it is of admirable quality. The built-in effects of the included VirtualDJ LE software sound nice, as well (but this review isn’t about the software as much as it is the hardware). One truly nice part is that the 3-band EQs do have true kill points, so cranking the bass all the way down will indeed make it completely remove from the track. 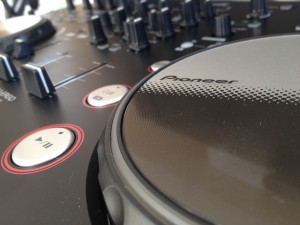 I watched with fascination when the ERGO was first announced, as aspiring DJs sung its praises. Whether they were enthralled by the features, the pretty lights or the Pioneer name, there were loads of “I WILL BUY THIS” comments around the Internet.

But will they really? Probably not, and here’s why.

Pioneer has, for ages, built very solid equipment. With the ERGO, it chose to include a host of great features, but the build quality is just lacking. When you look at the competition in the market, this $500 to $600 price range is heating up quickly and there are some amazing offerings in it.

The first one that comes to mind is the Novation Twitch (which I reviewed a couple of months ago). It’s lightweight, small, easy to use and includes loads of features as well. It’s also priced at $499, a full $100 below the ERGO.

The other big contender in this bracket is the newly-released Traktor Kontrol S2. With the included, full version of Traktor 2, it’s a near-bargain at the same price as the DDJ-ERGO. While the ERGO will work with Traktor, it isn’t included and touting VirtualDJ LE just isn’t enough to make me sway my decision on the price.

The end result is that Pioneer has always made respectable products for professional DJs. As such, the ERGO is a testament to the fact that Pioneer should continue its focus on the profession, high end customer rather than the beginner if it can’t meet beginner-level price points. This foray into the lower end of the market would be admirable if the ERGO was priced at $300 or even $400. But at $600, it’s just outclassed in the market.