The photo taking and sharing space is horribly overcrowded. In fact, it’s gotten to the point that nearly any app that lets me share photos with friends makes me cringe. But as aways, there’s a few gems out there that form a silver lining, one of them being a new app named Leap.

Created by Ryan Tinker, James Dickerson and Nick Cramer, it’s a curious deviation from the typical “seamless sharing features,” instead allowing anyone to create challenges built around snapping photos.

Hipster Hunt is my favorite example, where you compete with friends by taking photos of hipsters in your city. Whomever snaps the most hipsters wins. There’s also Breakfast Champion, a simple challenge to make sure you eat the most important meal of the day. My fellow bloggers might also get a kick out of the Inbox Zero challenge.

These are just there to get you started, as anyone can create their own challenges as well. You may be asking why you need photos to complete challenges, and the team provides one simple answer: “pics, or it didn’t happen.”

More on why Leap was created:

We’ve learned that competition is the best way to motivate people to try new and interesting things in their lives. Our group of friends is always competing somehow.

Most recently, we were trying to stick to a diet and wished that there was a better way to hold each other accountable. We couldn’t believe there wasn’t an app as simple as Leap that would let us turn this diet into a competition. Leap scratches our own itch and we’re excited for other groups of friends around the world to be able to join in on the fun. 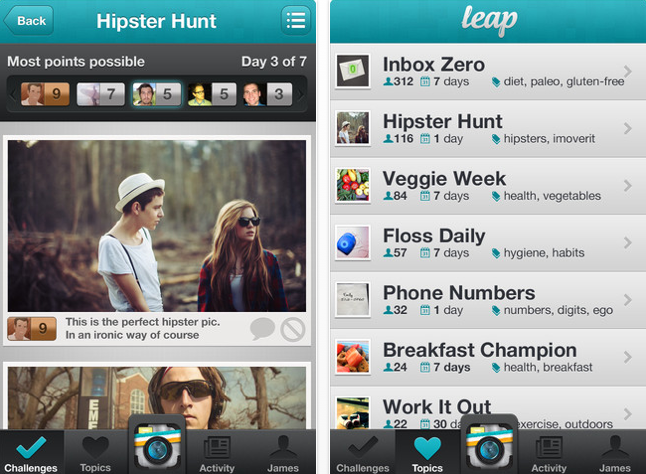 Overall, Leap is a simple app that makes a new game out of taking photos without forcibly gamifying something everybody already does. If you’re searching for something to do with competitive friends, this might be just what you’re looking for.