Do you wish your favorite writer had their own app? If you are a teen and like vampires, chances are that book publisher Penguin has just granted your wish with its latest release. Rather than a book, we are talking about an app, ‘The World of Richelle Mead‘, which is now available in the App Store. 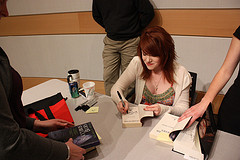 As you may or may not know, Richelle Mead is a bestselling urban fantasy author whose work is very popular among teenagers. According to Publishers Weekly, her book series ‘The Vampire Academy’ has sold a whopping 5.5 million print copies.

Due to her high profile, Mead is published by one of Penguin Young Readers Group’ imprints called Razorbill, which is dedicated to young adult and middle grade books.

According to Razorbill president Ben Schrank, this young audience means that mobile-focused initiatives around Richelle Mead are particularly relevant, and hopefully poised for success.

You don’t have to be a vampire fan to have an interest in today’s launch; the move is an interesting sign of what is to come in the publishing world.

As a matter of fact, Schrank admits that the app is likely to pave the way for similar initiatives for other Penguin authors. No later than last month, Penguin Young Readers’ Group launched an innovative app/novel called ‘Chopsticks‘, showing once again the potential of mobile for publishing. 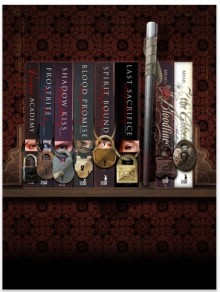 However, ‘The World of Richelle Mead’ is arguably even more ambitious. Talking to Schrank, it becomes clear that developing the app and its content required significant time and investment from both Penguin and  the writer. And that’s without even mentioning the associated production costs that were racked up by the project over the last six months.

While the app is free, it also serves as a virtual bookstore, through which Mead fans can buy e-books. It isn’t just paid-for content on offer, as app owners get access to a number of free bonuses, including behind-the-scenes video interviews and a character chart.

Interestingly, the app will continue to evolve over time, with the addition of updated content, including free chapters of upcoming books.

Here’s a teaser for the app:

As you can see, it is much more than just a bookstore; with Mead’s fan base in mind, Penguin’s ambition is to create an online community around her work.

As for the app itself, it includes additional social features. For example, readers will be able to connect with each other and with the author through the app.

While the latter is a feature that only works for writers that are willing (and able) to engage with their audience, the app includes another feature that could be relevant in any e-book; the option for readers to click on any sentence and share it easily.

This focus on features can be read as Penguin’s answer to the impact that the digital transformation has had on its relationship with writers.

Although authors are increasingly tempted to do away with traditional publishers altogether, this app provides a level of personalization and connectivity that self-publishing platforms cannot, Penguin says.

Yet, this temptation also exists among highly successful authors such as Harry Potter creator JK Rowling. Though you may think that her heavily publicized platform ‘Pottermore‘ has little reason to envy ‘The World of Richelle Mead’, but Penguin is breaking new ground here.

It is particularly worth noting that Penguin has put mobile first by opting for an iOS app rather than a website. In other words, it is doing in the digital world what good publishers have always done, helping their authors find their audience – no matter where they may be.

➤  The World of Richelle Mead, via the App Store