It could be a bit idealistic to call a self-publishing platform whose success is primarily based on Justin Bieber fan-fiction ‘the next sanctuary for the hopes and dreams of teenagers’. But the young people using a new platform called Movellas write about divorce, heartache, homosexuality, discrimination, pressure and angst. While some of them involve ‘Justin Bieber to the rescue’ themes, serious issues are at the core.

The publishing industry is quickly picking up on this sparking sensation that holds a pool of new talent. The young writers themselves don’t seem to even think about being spotted by a talent scout – they’re happy to be part of a community that reads, understands and responds to their thoughts and fears.

The concept of Movellas is based on ‘Keitai Shousetsu‘ – literature distributed through texting. This concept spread like a phenomenon in Japan. Movellas founder Per Larsen brought it to Denmark first before reaching out to the rest of the world. Instead of texting, the writers on Movellas publish their novels, poems or diaries online, one chapter at a time. Readers can subscribe to individual movellas or writers and receive the next chapter via email or have it sent to their phones through the Movellas app.

The platform has grown quite significantly since it kicked off last year. By now it counts about 5,500 movellas and 39,000 chapters published, from vampire novels (more bad-ass than Twilight) to love poems.

The individual movellas have started to reach out in all sorts of directions, many of them not even intended. Schools in Denmark, where the startup was founded, picked up on its effect among youngsters and began integrating it into their writing classes.

“Some [teachers] use it to teach English, as an opportunity to use tech in the classroom and to teach about social networks, how to behave online and just as a platform to collaborate,” founder Per Larsen told The Next Web. 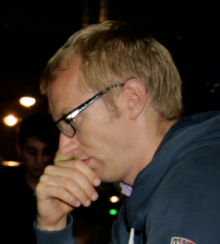 Per (pictured right) said the team never expected their idea to be used to this extent. They are preparing for the demand and hope that schools in the UK will soon join the teaching-through-writing movement.

We now have to develop some new features which will give the teachers more control. Most teachers want to be able to go about the teaching in a more closed way.

The big question is of course how do the pupils feel about that? As Per told me, writing in Denmark isn’t exactly the equivalent to winning that school football game and having the most friends on Facebook. But looking at the conversations between writers and readers on Movellas you see they are full of encouragement, empathy and solidarity, even admiration for another’s talent.

More than being encouraged to share what’s on their mind, the young users of Movellas often show real talent. The publishing industry is picking up on that, well aware how the Japanese phenomenon led to best-selling teenage authors.

What’s more significant though is how appropriate the movella style is for literature in the digital age. More than ever, we want what we consume to be fast, instant, as new and as little time-consuming as possible. Instead of a 500-page novel, Movellas sends us pieces of the story in nice little bites fresh from the writer’s pen (well, keyboard). Also, the writer is right there online waiting to hear our feedback.

Per explains that Movellas is trying to democratize publishing, but whether the model itself will generate any significant revenue we are yet to find out. While most users so far are aged between 13 and 20, Movellas was created for all ages. If Movellas and models like it wake the interest of older and possibly more established writers, it could do more than just encourage teenagers to explore their hidden talents. We might just see the rise of a modern style of publishing.