Jack Dorsey calls them Information Radiators. They’re big TVs with a bunch of slick-looking graphs and charts that give software firms a glance-able look at the status of their  projects, employees, sales, data and more.

Unfortunately, these kinds of status boards have been out of the reach of most mere mortals, because it requires some pretty decent software chops to hack them together. That’s where Panic Software’s Status Board comes in. It’s a friendly, beautiful and easy to configure set of widgets that let you cobble together a pretty substantial info radiator of your very own.

The app, which is $9.99 and runs on the iPad only, features draggable modules with simple configuration options that let you display a bunch of different data. The modules include time, weather, calendars, email accounts, Twitter, RSS feeds, graphs, tables and a ‘do-it-yourself’ option. The six instant panels let you tap on various context-sensitive options.

For instance, if you drag a Twitter module out, you can choose an account and then choose to display data types like tweets, timelines, followers and more. Many of those types can then be displayed by list, ticker, day or hour graph. Calendars can be set up as a rotating ticker, showing you upcoming things, which is cool, and email can be set up to either show you your mail or show you your depressing statistics like how many you get per day.

The inspiration for the app was Panic’s own Status Board, which is a pair of TVs that show project progress, maps, articles, revenue, bus arrivals, Twitter messages and more. The board, says Panic co-founder Cabel Sasser, had an unexpectedly positive result. “Les, one of our support guys, said it best after a week: “That board is like magic.”,” he said in a blog post. “Our support turnaround time is faster than it’s ever been. Just the simple act of “publicizing” those numbers — not in a cruel way, but a “where are we at as a group?” way — has kept the support process on-task and, I think, made it a bit more like a video game.”

When Panic showed off its board, Sasser said that the response was immediate and positive enough for them to take a whack at making one of their own. Unlike other options, there’s no monthly fee and no subscriptions, just a one time payment for the app and a separate in-app purchase if you’d like to unlock the TV Out ability to broadcast it over AirPlay to a big display.

The current Panic Status Board is two 55″ panels with the Status Board app running on iPads which are stuck to the back magnetically. They pipe data in from their own sources using the custom pane options, and they suggest that anyone looking to do the same check out StatHat, which can help to gather and pipe info to Status Board. Sasser told me that they’re actively looking to expand data partners to fill out more panes with more information, and that Google Analytics, Mint and other analytics firms are likely high on the list for the 1.1 release. 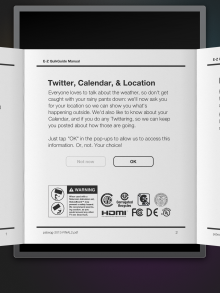 I’ve been playing with the first version for a few days, and it’s pretty great. The customizable data feeds that the table, graph and DIY modules allow for are beyond my personal grasp, but should be really cool for those of you that like to poke and prod scripts and such. But the ready-made modules are still very cool and it’s likely that we’ll see more of those on the way.

As a side note, the setup assistant is absolutely brilliant. It mimics a paper and staple manual that would come along with a TV or monitor and it guides you through the process while a lovely retro track plays in the background. A typically lovely Panic touch.

Remember, you’re going to have to dedicate an iDevice and a TV to this setup if you want the full experience, but an iPad alone on the desktop would still be a cool way to go if you want to track your stats.

For now, this is the best, most beautiful and most usable ‘home status board’ app that I’ve ever seen. I’ve got a TV in my office that’s going to be running this thing non-stop. Panic has a reputation for clever, useful design and Status Board is no exception. A very cool addition to the portfolio and a cool addition to your app arsenal as well.

➤ Panic’s Status Board for iPad