If you’ve not caught the idea by now, I’m a sucker for audio gear. So when a brand that I’ve watched for years, Orb Audio, got in touch to offer me a chance to review their futuristic-looking home theater system dubbed The People’s Choice, I was ecstatic. Though due to technical difficulties I’ve had very little hands-on time with the system, I can tell you what I know, and that is that Orb Audio has produced a home theater speaker system with quality that belies not only its size, but most notably its price.

For starters, it’s important to understand how Orb Audio systems work. They’re modular, so you can start with a pair of front speakers and a subwoofer, then add more speakers as your budget allows. Due to their design, Orb Audio speakers can be “jumpered” to each other by connecting the positive and negative terminals of one speaker to the corresponding terminals of another. As your system grows, Orb offers a line of stands that fit the different number of speakers that you’re using. A single speaker is referred to as a Mod1, while a two-speaker setup is a Mod2.

The other important thing to note is that you can’t go to a store to buy an Orb Audio system unless you’re in New York or LA. For the rest of us, the only way to get one is by ordering directly from the company’s website. While that might be a gamble for some, the massive amount of positive reviews for the company’s systems should quell your fears somewhat.

The People’s Choice is exactly what its name implies – it’s the system that most of Orb Audio’s customers end up building for themselves, so the company decided to offer it as a package. It includes a 2-orb center channel, left and right 2-orb speakers for the front, then single-orb speakers on the left and right for the rear. You have your choice of which subwoofer you want to purchase, be that the eight-inch or ten-inch model. The Super Eight is powered by a 200-watt amplifier, while the Super Ten steps up to 300 watts.

You also have a choice of colors, as you can see in the image above. From metallic tones through glossy black and white, each of the finishes is top-notch. The full system that was sent to me was the “Hammered Earth”. Though you should know that anything other than the black or white will cost you a bit more (an extra $120 or $240, depending on your choice), the price is well-justified for the automotive-quality finish on the units. 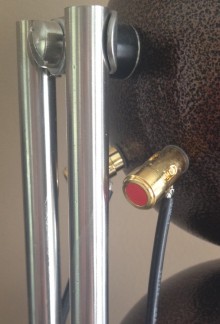 My only gripe about aesthetics comes from the Super Eight subwoofer. Orb Audio chose to do something that looks a bit like splattered paint, providing an interesting texture to the unit. I’d much prefer to have a simple flat finish. Otherwise, the Super Eight is built like a tank, with sturdy rubber feet that prevent unnecessary vibration.

There is one other complaint that I have about the system, but it’s minor. The stands that Orb Audio provides can prove to be cramped when you’re mounting two speakers to them. By the time that you mount the speakers, running the jumper cable between the posts will require nimble fingers, or careful use of tools.

But How Do They Sound?

Ah yes, that’s the real question, isn’t it? The short answer is that they sound far better than they ever should for a system of this size. While small speakers pushing big volume isn’t anything new, finding something that does it as clearly and as loud as Orb Audio will leave you hard-pressed. Want to find something that sounds as good in the same price range? Good luck.

The Mod speaker housings are constructed out of steel. While that might seem an odd choice, what you get is a speaker that has absolutely no cabinet flex, no matter how loud you have it running. This leaves the driver to produce all of the sound, rather than its housing. The sound that you do get? Superb. Positively stunning. There’s very little low-end, as you might expect, but that’s what the Super Eight (or Ten) is made to do.

Add the subwoofer to the mix and you’ll find yourself positively immersed in sound. It’s deep, rich audio the likes of which typically only comes from systems you won’t find for less than $4-5,000.

When you listen to the system as a whole, you’ll get the sparkling highs that you’d expect, but you’ll likely be surprised by the overall depth of the sound. In many small-speaker systems, the subwoofer is over-extended into higher ranges where subs simply don’t sound good. But with the Orb Audio system, the Mod speakers do a more-than-admirable job of producing the midbass tones that you’ll want to flesh out the full stage of sound.

The subwoofer is deadly accurate, with crushingly-powerful bass. I’ve simply never seen an 8-inch driver that can perform as well as this, and my audiophile friends agree. The power that the 200-watt amplifier is pushing must be radically clean, and it’s worth every penny.

So What Does it Cost?

Here’s the kicker – Because Orb Audio refuses to stock the systems in showrooms around the world, it saves a load of overhead. That savings gets passed to you by allowing the company to sell The People’s Choice for a mere $1,100. You’ll need to add a few bucks for the pretty finishes, or if you want to add 6.1 or 7.1 speakers, but the basic black or white can be yours for $1,100 and it ships for a mere 9 bucks.

It’s really easy to get caught up in the evils of home-theater-in-a-box systems. They’re cheap, easily accessible and have passable sound for most people. But if you consider yourself serious about sound then you absolutely must have Orb Audio on your radar. There have been very few products, in the hundreds that I’ve reviewed, that I’d recommend this readily. Oh, and they’re completely hand-made too, a process that you can see in-depth via the Orb Audio website.

So do yourself the favor of checking out Orb Audio. You can thank me later.