It would be easy to simply assume that the more than one billion residents of the world’s most populous nation don’t have much trouble meeting people, since they’re often surrounded by them, but it would also be reductive. China is in a tumultuous time as unprecedented numbers of residents move to cities, and the old ways of building community hardly apply to high-rise apartments and urban life.

A confluence of reasons have created a unique situation for singles in China. Today’s daters are a generation influenced by the one-child policy, economic reform and, for some, newfound prosperity. Meanwhile, urban migration has made strangers of millions of young people in China’s mega-cities. And yet, they also live in a time of rapid technological progress. These are children of the Internet, instant messaging and mobile phones.

The best technology solves problems, and large numbers of Chinese Internet companies have set out to solve the growing issue of helping men and women pair up in China. Young people face huge pressure to find a companion, often with the entire extended family getting involved in matchmaking. Researcher Leta Hong Fincher believes that women, especially those with graduate degrees who are past their mid-twenties, face the brunt of it.

“I personally see the women I interviewed coming under intense pressure to marry from all areas of life. I don’t see the same level of pressure on men, even though it does exist,” she said.

Some of the push actually comes from official government channels, as well. Fincher recently noted as much in a op-ed for The New York Times focusing on the state’s official designation of “leftover women” (剩女, shengnü), which refers to single women above a certain age. The government’s stance is age 27, though other opinions generally range from 25 to 30. Her editorial actually reverberated back in China, as it sparked a conversation on China’s Phoenix TV channel.

According to Fincher, China’s Women’s Federation has organized matchmaking events for these so-called “leftover women”, which it classifies as “highly educated, high quality women”. She speculated that the government is leaning on educated single women because it views families as tantamount to the country’s stability.

If You Are the One

One of the latest runaway hits in China is the Fei Cheng Wu Rao dating show from a Jiangsu television station. Literally translated as “If you’re not serious, don’t bother”, the show, which also goes by the English name “If You Are the One”, draws similarities from Britain’s Take Me Out. If you’re interested in learning more about the show, Kristin Graham offered up a rare gem of English commentary on the audition process over at Minyanville, though it doesn’t look like she got on the actual show.

TV makes for great entertainment, especially watching other people squirm on the hot seat, but only handfuls of people will actually make it on the show, so Chinese citizens have turned instead to that great equalizer, the Internet, to change their fates.

Though Fincher hasn’t focused directly on the issue of online dating, the issue has come up regularly during her research:

Jiayuan, which translates loosely as good fate, ranks as the top online dating site in China. It’s interesting to note that its founder and co-CEO Gong Haiyan started it in 2003 while she was studying for her Master’s degree she had a negative experience with fake profiles on an early version of a Chinese dating site. At least for her, the product worked – Gong met her husband on Jiayuan. For more on Gong, Evan Osnos’ profile of her for The New Yorker is a fascinating read.

As part of a flurry of Chinese tech firm IPOs last year, Jiayuan listed on the New York Stock Exchange (DATE) and was reported to have raised as much as $100 million with its offering. The stock hasn’t fared particularly well since it hit the market last May with an initial price of $10.70. It bumped up and down last summer before bottoming out at $3.70 earlier this year. Since then, it was worked its way back up to around $6 at the time of writing.

Though current economic conditions are likely to blame for some of the stock’s struggles, its fate hasn’t been helped by a high-profile criminal case and a lawsuit that involved Jiayuan. China Central Television reported last July that a man had been sentenced to two and a half years in jail for defrauding a woman that he met on the site.

The company is still profitable, though. In its second quarter, it brought in RMB 99 million ($15.86 million) in revenue and RMB18.5 million ($2.96 million) in operating income. It boasted 67.7 registered million users as of June 30.

But online dating is so last decade. Enter Momo, a popular social networking app for iPhone and Android that facilitates meeting new people nearby. It’s a social, local and mobile world now, and that means it’s Momo’s world to win.

Momo derives its name from the Chinese word for “stranger”. After launching last August, the app has garnered more than 16 million users in little more than a year. It hit 10 million on its birthday, which means that it picked up another 6 million users in just two months.

The Next Web sat down with Momo VP Zhang Ying, who heads up their overseas project, and Wang Li, the startup’s director of operations, to learn more about the company’s success. Wang said that the cultural background of China has helped Momo gain traction.

Zhang highlighted the need for the app because Chinese urban dwellers often don’t know the people who live nearby.

“With new technology we can rediscover our neighborhood. In China, the concept of neighborhood is kind of lost in our current communities. With this app we can build a new communication channel,” she said. 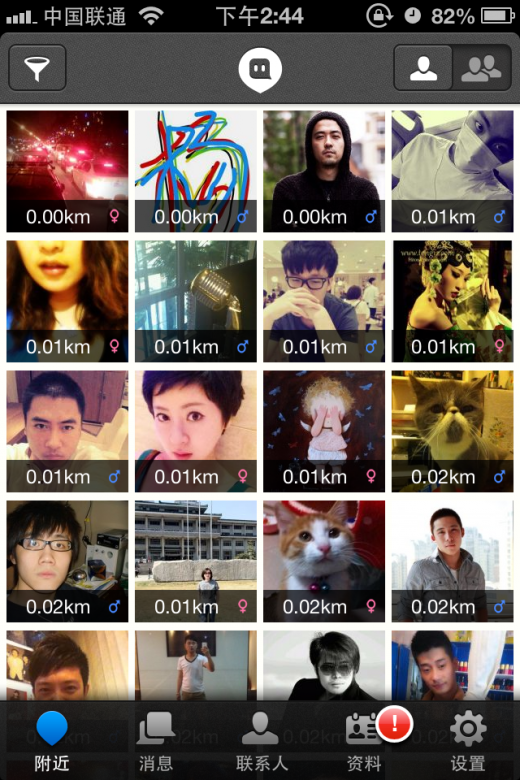 Though Momo has gotten a reputation for facilitating easy hookups between young people, Zhang was quick to point out that the app itself “doesn’t provide functions to flirt with people” and is at its core a very basic communication service.

Besides, serious relationships do develop among users of the app. The company knows of at least 30 couples that have gotten married after meeting on Momo. That might not seem like a lot, but the app’s only been around for little more than a year, so those are some pretty fast relationships by most standards.

Zhang also said that some recruiters are using Momo to search for job seekers, since many users’ profiles contain detailed information such as current position and education.

I asked whether Tencent’s WeChat is a competitor to Momo, since the messaging app has its own features for meeting strangers, but the Wang said that Tencent is so much bigger that the two function at different levels. As for Jiayuan, Zhang said that the site is more focused on serious relationships and caters to an older demographic than Momo.

So just how young are Momo’s users? The average age is roughly 25 and the app is very popular among students. Interestingly, the service attracts a 2 to 1 ratio of men to women, which they said is better than the industry average. It’s also worth noting that apparently the service sees a higher percentage of females logging in on iPhones, while Android tips more toward men.

For its part, Momo has amassed a staff of roughly 70 employees, which, like its users, are quite young. The average age of its workers is 24-25, the two executives said.

Looking ahead, the company’s working to spur adoption of a new groups feature that allows users to organize themselves into groups, such as movie fans within a certain building or complex.

I was curious whether Momo users stop using the service once they’ve gotten married or into a serious relationship, but Wang anticipates that users will adapt to the service as their social needs change over time. For instance, a family could use Momo to find other families with kids their age in the neighborhood.

Of course, it’s natural some men or women might get jealous if their partner continues to use the app, but Momo’s staff billed that as a personal matter and noted that they were simply dedicated to creating a social networking service app and letting the users decide how to put it to work for themselves.

Momo does have international aspirations, as it’s soon to release an English-language version. I took a look at it when I visited their offices recently, and while it looks like a stripped-down version of the current app, I was intrigued by the Facebook integration. Since Facebook is blocked in China and likely to stay that way for the indefinite future, any integration with the billion-user network is clearly meant for overseas expansion.

As is often the case with companies like this in China, Momo hasn’t yet focused on monetization. Instead, it’s keeping its attention on continued user growth with the understanding that profit will come eventually.

Hopefully it has enough money to last in the meantime. Earlier this year, rumors surfaced that Momo had raised $40 million in Series B funding, with e-commerce giant Alibaba reportedly signing on as one of the investors. Neither executive would confirm those details when I asked, but they did note that the company has been valued at $100 million.

I signed up for Momo a few days ago to test it out while writing this. Given that I’m married, just about the only way I can have this app on my phone without ending up in the doghouse is under the auspices of research. As I was sitting down to work on this article, I got my first ping from the app. A nearby user, allegedly a 26-year-old female, wanted to chat.

We exchanged trivialities for a bit and then I mentioned that I was writing about Momo and wanted to ask a few questions. When I asked her how long she had been using the app, she responded that she had been a member since the beta test and was probably among the “first batch” of users.

I inquired into her reasons for using the app, and she said that her job as a manager in the mobile app development industry has her keeping up on trends with new apps. She added that she uses the service to “study user psychology.” Then she offered to buy me a milk tea.

I’m skeptical that my one random encounter on Momo is indicative of the average user, but it certainly highlights the ease with which people can get started chatting on the service.

Even as China’s government is pushing for so-called “harmonious” families, social media has opened up opportunities couples that might not receive the blessing of the establishment. The gay and lesbian community is largely underground in the country, but there is evidence that many of its members have turned to Sina Weibo microblogging service to connect. Fincher said that some members of the gay and lesbian community often create two or more accounts because of the lingering taboo on being gay in China.

“Weibo has been a huge boon for the gay community in China,” she told TNW. 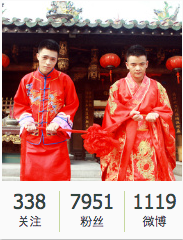 Though Sina Weibo is heavily regulated and censored, individual posts often fly under the radar. Bloomberg reports that a gay couple, which had previously made waves on Sina Weibo this summer when they announced their engagement, sent out on the service an open invitation to their wedding earlier this month. However, pressure from local authorities led them to drop their original venue and the two ended up holding the ceremony in public. The video subsequently made its way around domestic social networks.

While the official line still prohibits gay marriage, the government appears willing to let at least this one case slide. The wedding prompted a nod in the English commentary from the state-owned China Radio International, which described the wedding as reflecting “growing tolerance” in China.