Last week I was invited to a private screening of Olive – The first cinematic-quality feature film to be shot entirely on a smartphone. First-time director Hooman Khalili used a Nokia N8 cellphone, with a high-resolution camera adapted with a 35-mm lens to give added depth of field to the film, which was released in the Nuart Theatre, Santa Monica this week.

The plot follows a 10-year-old girl from another world who comes to Earth and “transforms” the lives of three characters: an old, bitter woman – played by Rowlands – an obese man and a foreigner adjusting to life in the United States. With Golden Globe-winning actress Gena Rowlands in the starring role and ex-Facebook Head of Communications Randi Zuckerberg making a cameo appearance, the cast follows the project’s theme of hollywood film making in a digital age.

The film cost around $500,000 to make, part funded by Silicon Valley attorney and former Facebook executive, Chris Kelly who said films like Olive, shot on smart-phones give anyone the tools to create high quality content, meaning the economics of the film industry could change in years to come. “It will no longer be about a few big studios controlling the industry, now anyone can create Hollywood-quality content for a fraction of the price’. 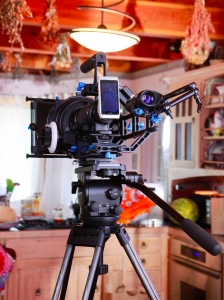 And Olive is Hollywood-quality; I was dubious that the smartphone claim might just be a cleverly engineered PR stunt, but without telling too much, the film has a beautiful, understated simplicity which moved me to tears at one point when the harsh crassness of the human race is illustrated. Olive is an organic movie with the main character (played by Ruby Alexander) exuding the juxtaposition of both innocence and a wise soul.

Rather than being a fast food fix of a movie made for kids with hollywood bells and whistles, much like most of the films being pumped into cinemas these days, Olive is an intriguing alternative that touches on the helping hand we all need when times are tough in life.

You can see the movie trailer and behind the scenes videos below and here I interview Randi Zuckerberg, director Hooman Khalili and producer Chris Kelly about the movie.

Enjoyed this? Read about the top 10 most pirated movies of 2011.