In the run up to the highly-anticipated fifteenth Call of Duty, the game’s maker Infinity Ward has released a virtual mission via a rather stern Facebook Messenger bot called Lt. Reyes.

He explains that he’s working on behalf of a NATO-style body called SATO and the enemy has scrambled the code needed to access to the defense grid and start fighting back.

More chat reveals a few additional details designed to help you solve the puzzle, with spoilers now on the Web pointing you to an event that will finally confirm details of the new CoD title later today, scheduled for 10.30AM PT on the official Twitch channel.

We then put Lt. Reyes to the test to see exactly what he does and doesn’t want to chat about – but he was difficult to throw off his mission.

He managed to sidestep my irrelevant questions and sent me a few links to help with collecting the clues, one on the company’s Reddit and one on YouTube. Others made their own efforts to catch him out. 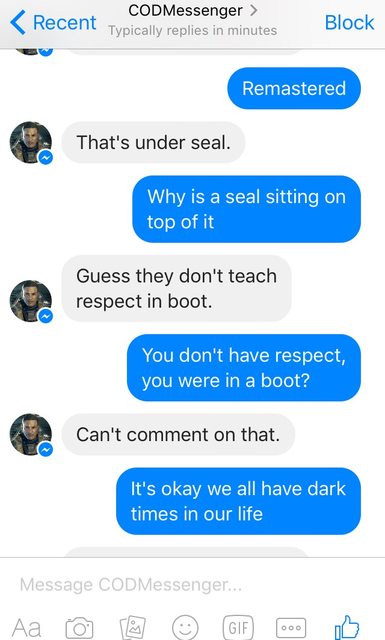 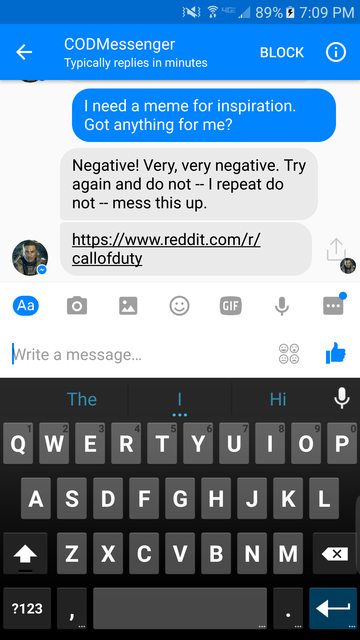 Then it seems like he ran out of script.

Infinity Ward has made a pretty neat job of using the new Facebook Messenger platform to add a bit of fun to its big reveal. We’ve got in touch with them to find out exactly how our new friend Lt. Reyes works.

Update: As suspected, the next CoD will be called Call of Duty: Infinite Warfare and will arrive on November 4. Here’s the reveal trailer.