Following the rollout of iPads and brand new Square devices into select NYC taxis, the MTA (Metropolitan Transportation Authority) is getting serious about integrating touch screens into the transit system.

According to NY Daily News, massive 47-inch interactive screens, dubbed “On the Go!,” will be installed into all 468 stations of the NYC subway system. The devices will replace many a ragged subway map, and should help make the system more approachable to travelers, tourists and locals lost in an unfamiliar borough.

More specifically, the touch screens will pack maps of local neighborhoods, travel directions, train schedules and the ability to search for nearby shopping, restaurant reviews and entertainment. Right now, the system appears to be running on a proprietary OS. 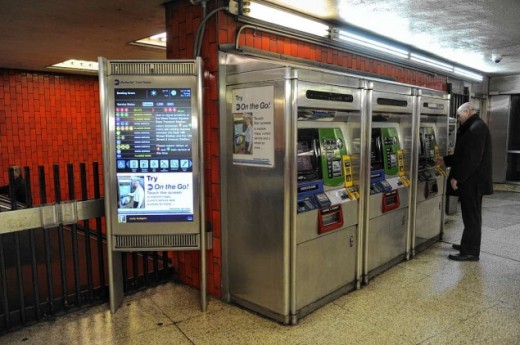 On the Go! screens were first unveiled in September at the Bowling Green subway station in lower Manhattan and two major subway complexes: Atlantic Ave.-Pacific St. in Brooklyn and Jackson Heights-Roosevelt Ave. in Queens. There isn’t a schedule for the complete rollout yet, but MTA is now apparently in talks with private firms.

The digital On the Go! screens would also be placed on platforms, replacing standalone paper maps and weekly service diversion notices that workers now change by hand.

Going digital will allow officials to update information and advertising remotely, officials said. The ads could even be tailored to specific times and neighborhoods.

“On the Go! goes far beyond what we can do with paper-based station information,” MTA spokesman Charles Seaton said. “It’s eye-catching, informative and immediate — a huge leap forward in station-based customer information.”

The tailored, location based advertising should also help bring in more money to the city, and might end up reflecting how companies view certain neighborhoods.

As I wrote earlier today, expanding and pushing the limits of technology is exactly what a city like NY must do if it really aims to become a tech hub. My only issue is the aging subway system, which could perhaps use more upkeep, paint, cleaning, etc before leaping to touch screens. Station quality varies greatly by neighborhood, so other NY residents might feel very differently. All in all though, these improvements are certainly welcome, pushing the city in the right direction.