Nubera, a company focused on the discovery and integration of cloud apps, has launched a new service today designed to give business professionals an easier way to manage all of their apps.

CloudWork connects with some of the most popular productivity and social media apps, such as Evernote, Twitter and Dropbox, allowing companies to automate some of their most important business processes through the cloud.

In practical terms, it is designed to cut out many of the regular and repetitive tasks associated with these apps, such as forwarding notes, maintaining social media campaigns, or backing up a project in the cloud. More importantly though, it automates tasks that involve using one or more these apps in conjunction with one another, thereby increasing your productivity throughout the day.

“CloudWork solves a big problem that small and mid-size companies face every day. It lets the business and social media apps they rely on finally talk to each other. Integrating your apps improves workflows and increases productivity. CloudWork makes a company’s apps work harder so the team can focus on what’s really important.”

Primault adds that the company has focused on the tasks that they know occur regularly in the real world, such as synchronizing contacts between apps, maintaining a master copy of customer interactions and receiving real-time notifications about various app activities.

CloudWork itself works as a web-based system with a tiered pricing model. Users select their existing apps and then authorize access to them, creating a “packaged integration stream” which they can then monitor whenever they like. CloudWork then checks for new activities by connecting with each app’s API and running selected tasks securely in the background. At launch, there are more than 30 apps and over 200 preset tasks or “streams” for users to choose from. 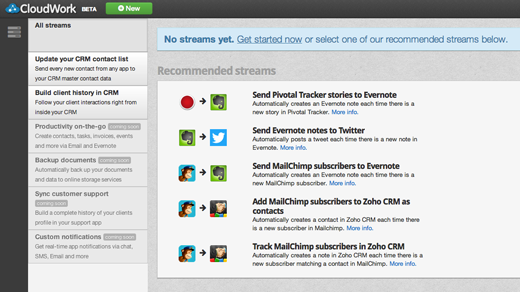 “What sets us apart is our focus on integrations that work and add immediate value,” added Primault. “Every single one of our integration streams has been tested and is guaranteed to work out of the gate.”

Nubera has also announced today that it has acquired Tarpipe, a company that specializes in integrating cloud apps. Over the last two years, the Tarpipe team has seen more than 25,000 users successfully integrate and automate more than five million tasks associated with cloud apps through its service. It’s therefore no surprise that the company has helped contribute to CloudWork, which will be unveiled later today at the WebSummit 2012 Spark of Genius competition in Dublin.

Nubera was founded in 2010 to try and help small businesses be more productive with cloud apps. Its first service, GetApp, is one of the largest independent app marketplaces, with over 4,000 apps and more 1.5 million unique businesses to date.