It wasn’t so very long ago that we were all looking for more ways to be connected online. With the rise of social media sites, this task was made more simple than ever before. I remember trading in my Treo 755 for a BlackBerry Curve because it had a better Web browser, by which I could more readily access what was happening on FriendFeed. When Twitter rolled around, I was subscribed to everyone that I followed by SMS. The world was a noisy place, and I loved every minute of it.

But as is often the case, there can indeed be too much of a good thing. I quickly found myself worn down from the constant updates, random banter and Foursquare checkins. Fast forward a few years, add Instagram, Vine, cross-posts from Facebook and just about everywhere else and suddenly the dull roar had become a full-blown riot.

I decided a few months ago that I was no longer going to use Facebook. While I do still have an account, it’s primarily there so that I can manage the Pages to which I’ve been assigned as an admin. While I’m fully aware that who I follow and what I see on Facebook is my own doing, creating my account so many years ago has left it as a place that is largely devoid of anything that I consider to be useful.

Twitter is still, largely, a valuable network for me. Whether it’s for keeping up with friends or following news, I’m sold on Twitter as the best platform by which to stay in touch with the world around me. But from time to time, even it gets too noisy. I’m already blocking so many keywords (Foursquare, Vine, a number of others) and I’m starting to unfollow people who only tweet these things. I’ve found that, as the world around me bombards my view with more information, a need to focus is greater than a need to be connected.

I’m apparently not alone. The trend among the big social networks these days is to group the people with whom you’re connected. Facebook Groups, Google+ Circles and Twitter lists all manage to do this fairly well, but even then the noise problem persists. It’s possible that Path, with its focus on connecting to a maximum of 150 people, is the least noise-filled of any of these services but the chat function of the latest update has broken down a wall that I previously held dear.

The Rise of Quiet

I’m friends with a lot of people who are smarter than me. One of these friends, with whom I was having dinner on a recent trip to San Francisco, told me about a thesis that he has when it comes to social and the Internet as a whole. Essentially it breaks down to all of us holding a lack of noise in a position of more importance than we have in the past. 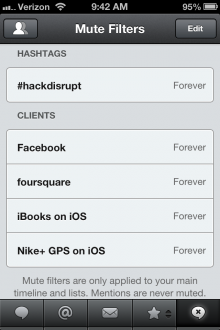 Though really the idea is not new. Back in 2010, scrappy startup JESS3 came up with a thing called Ex Blocker. While it was directed toward blocking a former significant other, the end result was that the company created a filter that kept you from seeing what you preferred to miss, while otherwise not interrupting your large-bore IV of Internet.

The fact that we have filters within Twitter applications is yet another testament to this dream of a Utopian Internet experience. In the best of cases, apps like Tweetbot allow us to block something on our phones an then keep us from seeing them when we’re using the desktop version of the app. But even that’s not quite good enough. What’s really lacking is a singular solution that works not only on one app, but across all of them, and extends beyond one network.

The difficulty that we face, and perhaps the leading cause of our noisy Internet experience, is that worlds are often forced to collide. On my TweetDeck display, I have my personal account as well as mentions for it, @TNWAcademy, mentions for @TheNextWeb and a second account that I use only for work. When I’m at home, this works well because I can keep personal stuff on the personal account. When I’m on the road (which happens pretty often), that luxury is no longer afforded to me.

While I don’t actively use Facebook, I still manage friend requests and subscriptions. Roughly 75% of the people with whom I’m connected there are either involved with electronic music or they’re friends from video games. There’s perhaps 15% who are people I knew in high school who’ve added me and I’ve immediately hidden them because I didn’t like them then and don’t like them now. The remaining 10% are people who I met professionally, but have somehow struck up a friendship worthy of Facebook’s fleeting “Accept” interaction.

It could easily be argued that, if I deleted everything and started again, I could clean up this mess that I’ve created. But the fact of the matter is that very few people actually want to go through the trouble of this. As such, we’re left in a noise-filled Internet world, inundated with Foursquare, Vine, Instagram, baby’s first poops, gun control debates and all of the other unpleasant, largely-ignored interaction.

The first problem is one of relevance, and it’s an issue that most social networks fail miserably at fixing. Facebook’s curated timeline absolutely sucks for me, and it’s never gotten better no matter how many stories I’ve hidden. Twitter’s promoted tweets work a little bit better, but who I follow is very much my own fault. Google+…well, I have an account.

But now that the problem has been created, it needs to be fixed. I’m seeing some hackers piece together functions that will mute the things that you don’t care to see, regardless of what platform you’re using. While an influx of content might have been the most valuable thing for the past few years, it seems to me that there’s a welcome shift coming on with the rise of the filtering culture.

Or maybe we should just scrap the accounts and start again. I may never get another useless Klout perk, but maybe that’s a good trade-off for the return of sanity.