Nike has teamed up with online football retailer Pro Direct Soccer to create an e-commerce football app, which also integrates a broad range of football-related content.

As with any app worth its salt, ‘social’ plays a key part in Pro Direct Soccer Zone. Twelve (Nike-sponsored…) footballers have their own profiles within the app, including Wayne Rooney, Cristiano Ronaldo, Gerard Pique and Jack Wilshere. Each profile is a stream of news, on-pitch performance gear, off-pitch leisure wear, photography and videos, all of which is interspersed with updates from the athlete’s Facebook and Twitter accounts.

Each player’s chosen products can be explored in detail, and high-res images accompany each item, as do pretty comprehensive product specifications – in short, it helps football fans kit themselves out exactly like their heroes.

Users can also create their own profiles that match those of the pros, with each profile tailored to the individual’s position, style and playing standard.

The app offers access to Nike’s HQ in Beaverton, Oregon, where members of its Football Research & Development team have been interviewed about the design and testing processes that goes into the development of Nike products. These video interviews won’t be made available elsewhere. 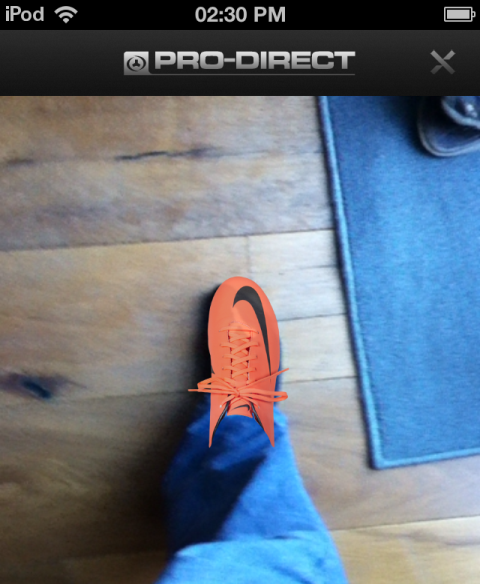 Whilst it may be a little on the gimmicky side, the virtual boot-room is a nice additional augmented reality feature, letting users try on Nike’s range of football boots, leading the user into parting with their money through the app’s e-commerce store.

The boot-room uses your iPhone camera to superimpose Nike’s footwear onto your feet. It also integrates with your social networks, should you have a hankering to let your friends and followers see what a virtual boot looks like when superimposed onto you.

It is actually a very well put together app, and whilst it is ultimately an e-commerce platform, it throws a decent amount of value into the mix for those just looking to feed their addiction for all-things football.

Nike has slowly but surely been carving out a niche for itself in the sports/tech space. Earlier this month, we went hands-on with the new Nike+ FuelBand, whilst we also got a sneak peek at the world’s first Nike+ FuelStation in London.

Meanwhile, the Nike-powered Pro Direct Soccer app is only available to download for iOS devices in the UK at the moment, though we’re told that an Android version will be arriving on the scene in the not-too-distant future.