The New York Times has updated its Android app for mobile and tablet users with the option to select an international edition of the day’s news.

From today, you can freely select between US and International editions to access the latest news from around the world, all of which should be nicely formatted for your mobile or tablet’s screen, the organization said. 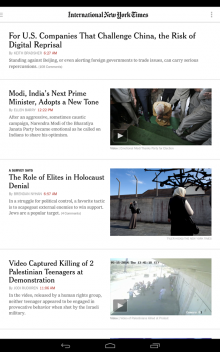 “The launch of an international edition on the The New York Times App for Android answers the demands of Android users worldwide and further anchors The Times’s commitment as a global news organization,” Denise Warren, executive vice president of Digital Products and Services at The New York Times, said.

Other features of the app remain unchanged, but it’s nice that Android users now get the chance to switch between editions – iOS users could already do this.