The US Government is no stranger to wasting money, and particularly with emerging technologies, it’s hard to say if government agencies actually grasp what they’re doing (and paying for) in the first place.

One impressive example of this is OSHA’s (Occupational Safety and Health Administration) Heat Safety Tool, which is essentially a terrible, ugly and useless app that cost US taxpayers upwards of $200,000.

Now, New York’s own 311 app is under scrutiny by none other than the city’s mayor himself, Mike Bloomberg. The NYC 311 app was released to provide a user-friendly service for citizens, but unfortunately, though our hopes were never considerably high, New Yorkers have still been let down by the buggy and decidedly dull app.

Lately NYC has been working harder than ever to build its tech roots and has done so with much success. Initiatives like the city’s first green hackathon, the BigApps NYC competition and NYC’s ambitious open data policy prove that embracing the tech is a priority, but it appears there’s much more work left to do.

Apparently, Bloomberg is fuming over this app’s bugs and clumsy architecture, and is ordering the city to fix the problem immediately. So far, only 4,000 people have actually used the app to file a complaint, and its no surprise why. From our experience, the app is about as bad as the Mayor says it is, with its dull, list-like navigation and dodgy geolocation features. 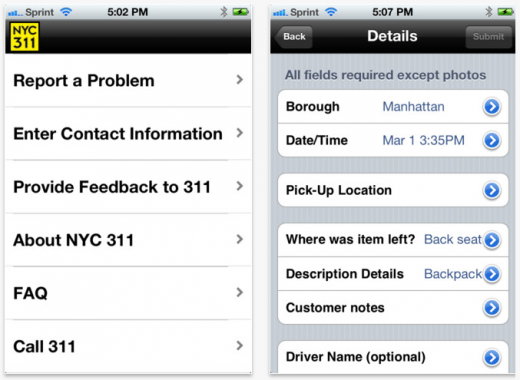 This is an opportunity for the City to lead the way for government app programs (both locally and nationally), and it’s great to see that the Mayor is getting behind the project for a little “push.” That said, it still feels like the greater public has nearly no voice in the overall project, and that has to change before anyone’s going to be completely satisfied with the results.