NYC Mayor Mike Bloomberg has signed into law what he calls the nation’s “most ambitious and comprehensive” citywide open data policy. This new law, ‘Intro 29A,’ actually mandates city agencies to unlock the data they use to track progress, in an effort to increase transparency and innovation.

While many cities have open data policies, it looks like NYC is the first in the US to require “more than reasonable efforts by city agencies.” The law will be phased in over the next six years.

The Mayor called the NYC BigApps competition a driving force for dealing with all this data, “helping New Yorkers do everything from pick a restaurant to find a parking space. At the contest’s core is a simple premise: this data belongs to the public, and if we make it accessible to everyone, the possibilities are limitless.  That’s exactly the purpose of the bill before me today.”

Across City government, agencies use data to develop policy, implement programs, and track performance — and each month, our Administration shares more and more of this data with the public at large, catalyzing the creativity, intellect, and enterprising spirit of computer programmers to build tools that help us all improve our lives. 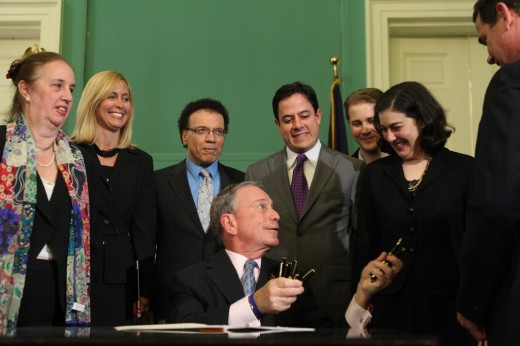 This law reflects the city’s push to become a leading tech innovator, and shows Mayor Bloomberg‘s continued support in this direction. It’s refreshing to see a government advocate greater transparency and is sure to at least lead to some very interesting mashups of data and apps.