A little more than a day after the new iPad was announced, Apple is already facing intense supply shortages. According to iMore, new orders are now shipping in 1-3 weeks, so if you haven’t ordered yours yet, you’d better get to it asap!

We reported just this morning that all white, 4G-enabled iPads on AT&T are delayed through March 19th, and it’s no surprise to see things get even worse now that customers have had a second to think the purchase over — that is, since everyone has apparently decided to go ahead and buy one.

Right now, this is only in the UK, but the US is expected to follow suit. As TNW’s own Martin Bryant wrote:

While you may shrug your shoulders and say “So what?”, it does mean that if you’re looking to get the device delivered to you on day one in the USA, you’d better get your skates on. 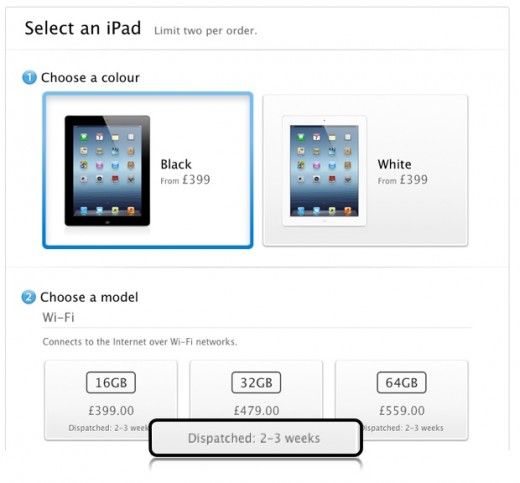 For a full breakdown of what Apple announced yesterday, check our handy guide. You can also check out our first look at Apple’s brand new iPad.