There’s a new chat app in town that doesn’t feature a new way to shoot selfies or make anything mysteriously disappear — and it’s not dull and boring.

comiXchat, a free messaging app by Nubis that displays individual or group chats in an artistically appointed, hand-drawn comic interface, debuts today at — where else? — Comic Con New York. And it’s sure to put your conversations on a different wavelength.

Avatars and emoticons are nothing new in today’s chats, and many sophisticated messaging apps feature avatars sporting facial expressions, multiple stickers or customized emoticons. But comiXchat is different.

Read article
The chat interface where you can choose emoticons and attach pictures.

The app features hand-drawn illustrations by Australian illustrator Otto Schmidinger that are automatically generated by the app’s servers. As you chat, the app draws your text messages inside a fanciful, immersive, real-time environment.

The drawings are black and white only, with a stylized “weird fantasy comic book presentation” generated by the app’s artificial intelligence engine. It takes into account the content, tone, location and context of the messages and draws a real-time illustration derived from it.

Save and share a full chat or parts of a chat.

Thus, gestures, facial features and expressions will vary depending on the chat’s content and emotion. There are different background scenes, such as the beach, the pub, or the woods. There are just a few characters to choose from, at least in the free version I tried, and you can switch avatars in mid-conversation, if you want to shake things up.

Emoticons are also available in the interface for when you need some help, and they are integrated into the avatars expressions. 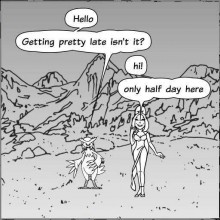 The app uses multiple avatars and settings to change avatar positions, expressions, background settings, camera angles and lighting as the conversation continues. The scenes zoom in and out with each frame to give different perspectives during the conversation. You can also attach photos within the conversation frame. 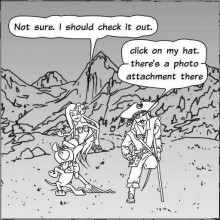 Can it get more fun than this? Of course it can. comiXchat has announced a social media download campaign beginning today and running through November 7, in which rule-abiding winners will receive, among other things, an autographed copy of their own avatar, hand-drawn by the artist.

For now, comiXchat is free and ad-supported. An ad-free premium version will also available in the future that will offer additional avatars and background settings. Download the app now from Apple’s App store, Google Play and Windows Phone store, all of which are linked from comiXchat’s website.