Even if people aren’t paying for music, they still like to talk about it. Music is one of the most popular topics of conversation on Twitter, which is why every musician and band should be tapping into it if they haven’t already. In fact, 50 percent of people on the social service follows at least one artist.

The most common, and obvious, use for Twitter is for bands to keep their fans updated on what’s going on. Switchfoot, for example, uses it to let fans know if there’ll be an acoustic set after the show offsite.

“We’re always looking for ways to connect social media to real world interactions,” says Switchfoot bassist Tim Foreman. “Some of the ways we’ve done this is by hiding tickets, merchandise, or unreleased music and then tweeting the location. We’ve also used it to set up secret shows in unlikely locations, or as a way for fans to request songs.”

Twitter isn’t the only social network that band’s should be utilizing, each has its own differentiating benefits. But because Twitter is an open conversation its also the easiest one to get a sense of what’s being said about your music—Facebook is a blackhole trying to see who’s sharing links, for example.

“I find it a great way to communicate publicly with fans, usually in the form of questions. Facebook is just for posting what we are currently up to, Instagram shows what we are up to, but neither are a great way to answer fans publicly like Twitter.”

@Awh_Zombie I don’t remember being there?

Whether your band has been on Twitter for years, or is just getting started, here are some helpful tips targeted at those holding guitars — keytars, mics, or drum sticks.

It would be nice if everyone talking about your music would just mention you by name, but that rarely happens. A lot of the time you need to do a little searching to uncover a lot information.

Starting simple, it makes the most sense to do some basic searches like theses.

Just these basic queries should uncover a lot of insight into who’s talking about you. Some of the more interesting searches, below, might uncover enthusiast fans actively helping to spread your band’s music to other listeners.

Looking for bands you have played with or are going to be playing with can lead to some new connections. You might find different booking managers or promoters that are key to getting a future gig.

“If you’re an artist or underground producer looking for placements and collaboration opportunities, you can specialize your search queries to find radio stations and other artists looking for submissions,” she tells TNW.

After you find new connections and people sharing your music, don’t scare people away by bombarding them. You probably don’t walk up to everyone on the street and ask them to listen to your band, so don’t do that online either.

The worst thing you can do is to start spamming people. It may not seem like a bad idea to copy and paste the same message to 50 famous people, but remember, all those tweets are still viewable on your timeline. People that do stumble onto your profile will see the same generic message sent to everyone. As a fan, that’s a big turn off.

Be authentic when reaching out to people cold call style. Make sure it’s someone you follow, have an idea how they use the network, and write something specific  when asking them to check out your music.

Remember: Show personality, authenticity, and interact with people, but don’t spam them.

How do you interact with lots of fans and interesting connections without spamming? Try favoriting. When you find people talking about you, let them know in a subtle way.

No one really knows what the star button is exactly so there’s no wrong way to use it. Some people use it to bookmark tweets, usually containing links, they want to come back to later. The growing trend, however, seems to be using it as a like button. It’s a hat tip, a poke, a like, an acknowledgement.

Why does it matter? People like to be noticed and seeing a subtle acknowledgement from the band they mentioned is a delightful experience. There’s a good chance they’ll follow you or interact with you directly and it becomes a simple way to gain a loyal fan. 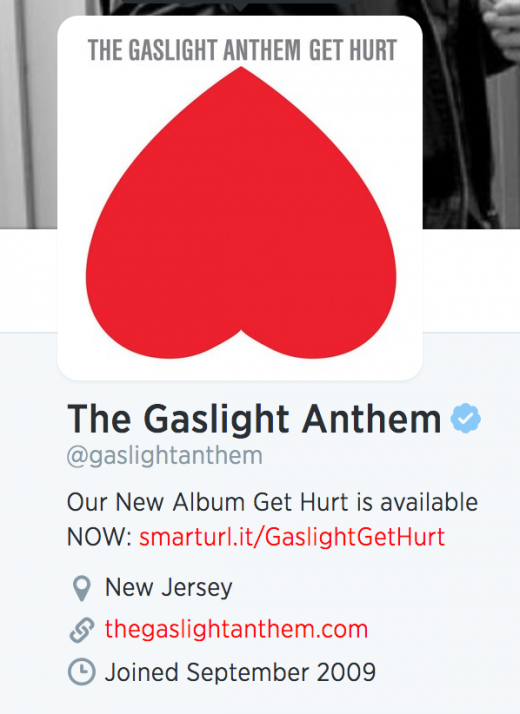 It might seem obvious, maybe even ridiculous to mention, that filling out the bio section of the profile is important, but there are lots of active bands with worthless bios.

Put clear contact information where people can listen to your music and get in touch with you. It’s a small, but great opportunity to promote your current or upcoming projects. Seriously, do it.

Twitter isn’t just an extension of your band’s website, it may be the discovery point and people need a way to easily get more information about you.

Hashtags as a social norm really took off on Twitter and spread to other services. Using a hashtag, more than anything, is about being able to track a topic easier. If you are releasing a new song, album, or video, it makes sense to use a hashtag in a natural way.

As a side benefit, if you do use a song title as the hashtag and it garners enough traffic on Twitter it may make it into the new Billboard trending chart.

We’re filming the music video for #WhenWeComeAlive! Want to be in it!? Hit us back: #WhenWeFilmAVideo (in San Diego on monday) — Switchfoot (@switchfoot) August 16, 2014

These tips apply to those outside of the music industry as well, but if you’re looking to channel your social engagement on Twitter, be sure to follow these guidelines to better connect with fans and potential collaborators.

Read next: Music in the midnight sun: Behind Norway’s edge in online music