A lot has been said and written about Taylor Swift and her reasons for culling her music on Spotify. Ultimately, it’s all about the perceived value of her tunes – she doesn’t want people on a free, ad-supported service listening to her music on-demand.

Regardless of which side of the fence you sit on the debate, all this hullabaloo does raise an interesting question about the value of music today. With online piracy still rife, and pretty much every song ever recorded (give or take) available anyway on the likes of Vevo or YouTube, how much is a song or album actually worth these days?

The answer to that question may not make for pleasurable reading: however much someone is willing to pay.

While this hypothesis goes against the stance Taylor Swift and her record label are taking, it’s very much backed-up by countless examples strewn across the online music realm.

Just a few months back, Rdio encroached on Pandora’s territory with a new free ad-supported internet radio tier. This is why you’ll still find Taylor Swift on Pandora and Rdio, as the music isn’t made available on-demand for free.

Spotify’s free ad-supported incarnation, on the other hand, offers many, if not most, of the big-name artists on-demand. But Taylor Swift has now left that particular party.

Elsewhere, Spotify is looking to tempt more users on board by cutting prices and undercutting the competition. Less than a month after Spotify announced it was introducing family subscription plans, charging a few bucks less per-additional-person than Rdio, Rdio was forced to match Spotify dollar-for-dollar.

Race to the bottom?

There is so much competition now in the online music-streaming space, it sometimes feels like a race to the bottom, with companies chipping away at their already value-for-money services to tempt new users on board. People have grown to expect things for free, and that’s a difficult trend to fight when you’re chasing paying members.

The debate gets even more tenacious when you consider some big-name artists actively give away their music for free. U2 was the latest superstar upstarts to offer their new album to the world’s masses for free, albeit only to those using iTunes. Yes, they will have been paid a hefty sum by Apple, but the point is the music was free for the end-user.

Looking further back, Radiohead let fans decide how much to pay for its In Rainbows album back in 2007, which effectively meant you could elect to pay a grand total of zero if you so wished. But Thom Yorke only wants to give away music when it’s on his own terms. Nine Inch Nails too have previously given away their music.

There is an argument that if you let people decide themselves what they should pay for something, this makes them take a responsible approach to the matter. And it’s this approach that Radical.fm has been taking.

Radical approach: Pay what you can

Radical.fm is a Pandora-style internet radio service that adopts a radical approach to the music monetizing conundrum – it asks you to pay what you think it’s worth, either as a one-time payment or a regular monthly fee. It’s sound (pun intended) on many levels – if you don’t listen to a lot of music in a given month, just don’t pay. If you host a myriad of house parties and used Radical.fm day-and-night, you could elect to pay $100. You could equally pay $1.76, $14.21, or nothing at all.

We first covered Radical.fm way back in 2012 when it was available on the Web – albeit with a limited arsenal of tunes outside of Sweden. It has shifted focus since then to mobile, launching as a US-only service last year for iPhone users. It finally arrived on Android a few months ago.

Today, Radical.fm has finally shaken off its mobile shackles and arrives on the Web, representing a milestone moment for what is a fairly unique platform in this space.

Radical.fm is hand-curated by humans, with “orders to build the best sounding genres regardless of economic forces,” the company proudly proclaims. And you’ll also be pleased to know that it’s staying true to its word of not funding this through advertising – which puts even more pressure on listeners to dig just a little bit deeper and cough up at least something.

At the heart of Radical.fm is My Stations, an interface that lets users mix any number of curated genres, giving each one a value relative to the others. This brings fairly granular controls to your internet radio stations, even if you can’t influence the exact song choices in there.

As with other similar services, you can choose to ‘Block’ or ‘Like’ tracks, as well as skip songs. But then there is My Lists, which lets you search from 30 million-plus tracks to build your own custom genres around. While this isn’t on-demand as you’d expect from Spotify, it’s reasonably tailored.

For example, while you can’t listen to full songs through manual search, you can listen to 30 second snippets which helps you identify a song before adding it to one of your lists. These lists can then be allocated a genre and associated to an existing station, which increases the chances of your songs being played.

All the big-name artists are on Radical.fm too, including the Beatles, Rolling Stones… and Taylor Swift. 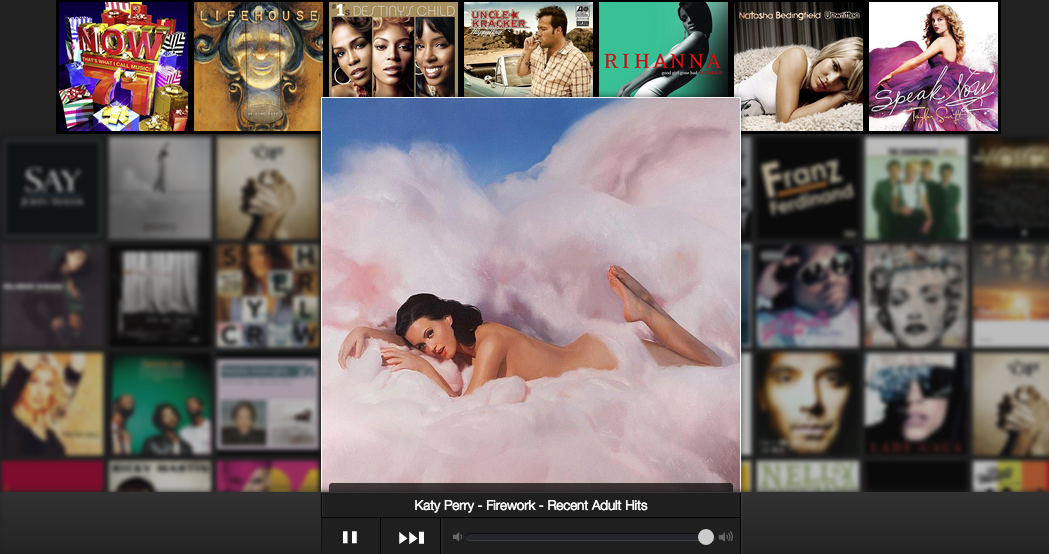 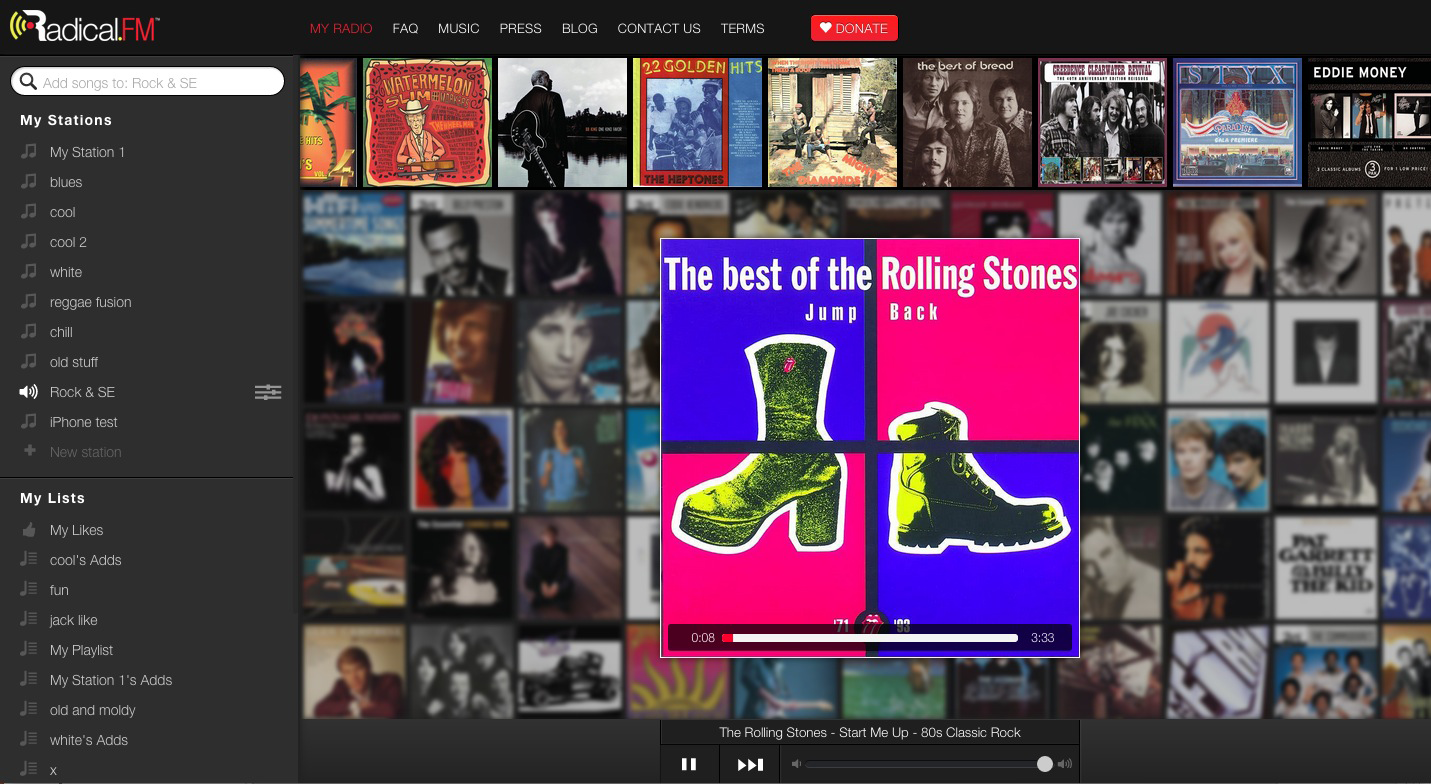 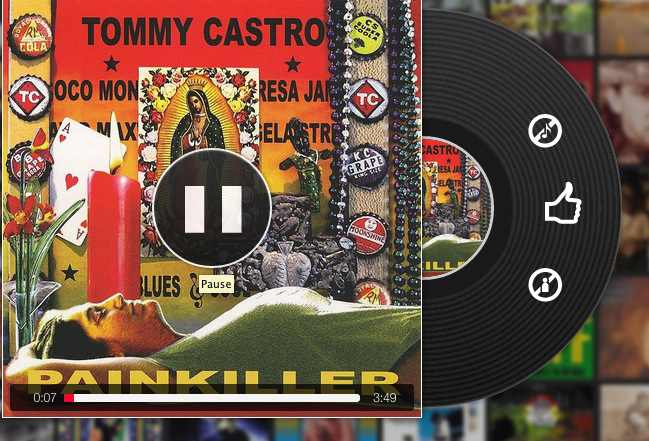 A handful of new features have been introduced to the new browser-based incarnation too. For example, you can now scroll back 100 tracks in your personal song history, and choose to ‘Like’ or ‘Block’ specific tracks retrospectively.

There may well be ‘better’ music-streaming services out there, but that’s a debate for another day. The timing of Radical.fm’s latest launch is probably little more than coincidence, but it is still notable given the very recent public debate that’s grinding through the digital music sphere.

Long before this recent debacle kicked off, Taylor Swift made her feelings known on streaming platforms, writing in the WSJ:

“It’s my opinion that music should not be free, and my prediction is that individual artists and their labels will someday decide what an album’s price point is. I hope they don’t underestimate themselves or undervalue their art.”

Despite Swift’s assertions, we aren’t really seeing a huge exodus from Spotify and other similar platforms, and I’m not entirely convinced we’ll see that day Swift envisages. Few could reasonably argue that music itself should be free, but the big question is how is it paid, who pays it, and how much do they pay?

As with any commodity in life, something is only worth what someone is willing to pay for it. It’s a cliche, but it’s true.

Tidal launched its music-streaming service a few weeks back – it’s similar to Spotify, except it costs double the amount of money each month. Why? Well, it uses ALAC and FLAC lossless formats at 1,411 kbps – or roughly 4 times the bit-rate of the best quality you’d find on Spotify. I’m no audiophile, so I’ll stick to my 320Kbps Spotify for now, which only costs $9.99 per month.

Again: Something is only worth what someone is willing to pay for it.

While plenty of people are still willing to dig deep and pay to access music online, plenty of people aren’t. Spotify claims more than 40 million active users, but only 25 percent of them are actual paying subscribers. This tells a story, and things could go a number of ways moving forward.

Either Spotify ditches its free, ad-supported on-demand version, or Swift and other defectors simply accept that this is now the way of the world and make all their tunes available to everyone on every music-streaming service around. Or, we could see a permanent stand-off between some artists and some music platforms.

However, with so much competition now, and with many of the hitherto USPs vanishing due to convergence, as we saw with Spotify launching family plans, this so-called ‘race to the bottom’ may lead to many such services crashing and burning.

Radical.fm’s arrival on the scene is symptomatic of this struggle we’re seeing in the music industry. It’s a collective desire to put the boot into piracy, while simultaneously opening up access to nearly every song imaginable, at a price people are willing to pay.