There’s already a slew of apps out there for folk looking to move home, or do a spot of DIY. One such app which we covered last year was Lovely which is, erm, a lovely iOS app to help you find your dream apartment.

Now, another apartment -seeker and -publisher’s app has hit the market, professing to offer one key differentiator over its rivals.

MoveMent is an iOS-only app (it will likely remain so, too) that’s currently most-active in New York City. Manhattan, more specifically, though the plan is to have it active everywhere – not just in the Big Apple.

As with other apps of its ilk, MoveMent lets you browse simply by scrolling, or by dragging a map around. At the time of writing, there aren’t too many apartments listed if truth-be-told, but it has only been live for a couple of days.

It is actually a really nice app to use, with swipes and taps very much the order of the day. Scroll down to see older listings, and left to see more photos of a specific listing that catches your eye. All the information on the apartments is featured on the feed.

However, it actually serves not only as a decent app for those on the hunt for apartments, but also those with one up for grabs, letting you snap pictures and videos from your iPhone and post immediately.

This is where the app strives to be a little different. The problem MoveMent proclaims to solve is the issue of unscrupulous landlords posting false images and fake listings. And it does so via geotagging.

In a nutshell, MoveMent verifies that the images or videos used to advertise a place are based on the exact advertised location – but of course, publishers must post the ad using their iPhone. So MoveMent posts ‘verified apartments’ to let users know for sure the exact time the apartment was filmed or photographed, and that they match the advertised address. 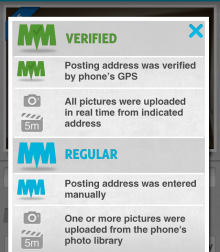 You’ll know if an apartment is ‘verified’ based on the color of the ‘MM’ logo attached to an apartment’s listing. While it is an interesting idea for sure, there are issues.

Firstly, the apartment publisher must have an iPhone. If they don’t, well, they can’t use this. For MoveMent to gain a reputation as having an extensive range of apartments, it needs to open up beyond the confines of iOS – Android is more than half the smartphone market, after all.

Secondly, I wonder how serious an issue posting false images really is? From my own experiences, the most misleading aspect of apartment-listing photographs is that they often give a false impression of the size – a room can often look larger than it actually is. MoveMent can’t (and doesn’t proclaim to) solve that.

If I arrived to view an apartment, and it was evidently not the place advertised (which has never happened to me…ever), I’d be inconvenienced for sure. But I’d just move on to the next place, and assume it was one-off ‘bad egg’, so to speak.

At any rate – MoveMent is a nice addition to the existing slew of apps already in the space. However, it needs to start tapping some APIs pronto to populate its content – but that would obviously negate the geotagging feature the app pins its hopes on.

The app was created by the same folk behind Fuel Monitor, which shows drivers exactly how much their trip’s costing in real-time, an app that’s well worth your attention.

MoveMent is available to download for free now. Meanwhile, check out the official promo video below.