There are pros and cons to being the resident audio geek of TNW. One pro is that I get to test an amazing array of audio gear. The con is that, sometimes, I have to write reviews that aren’t overwhelmingly positive. This review of the super-sexy Vortex Pro headset from Moshi is one of those times.

First let’s talk about what the Vortex does right, because there’s a lot of it and it’s worth mentioning.

From a design standpoint, the Vortex Pro is a lovely piece of equipment. The all-metal construction of the ear bud feels solid, without managing to be overly-heavy. The company includes 3 ear tips — 2 rubber-feeling sets and 1 foam pair. The included carrying case uses a very unique design that does a great job of keeping the cord from tangling. The cord itself is braided with what feels like a nylon sheath, which works well for keeping it where you want it.

Now we have to talk about the stuff that’s not so great. There are no deal-breakers here, but it’s an interesting mix of good intention and bad results.

At lower volumes, they Vortex Pro sounds amazing. Across a wide variety of music, I was pleasantly surprised to hear satisfying lows, crystal-clear highs and punchy midrange tones. But if you happen to like a song and want to rock out a bit, you’re going to have a bad time. At anything higher than around 80% volume on my iPhone, the 9 millimeter drivers sounded like they were burping, which was simply unbearable. 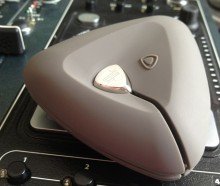 That same nylon sheath ends up being a complete pain in the tail. It doesn’t allow free movement of the wires, so they tend to feel like wrapping up a water hose. If you don’t allow the wire to move freely, it can get firm twists in it that are difficult to deal with. The included carrying case is good for preventing the kinks in storage, but it seems like a necessity rather than a feature. You’ll never want to just stick these into a bag or pocket. They’ll become hopelessly entangled and they’re a pain to sort out.

I tend to have to use bigger ear tips for just about any in-ear headphone that I review. None of the 3 from Moshi fit very well. Admittedly I’m probably a fringe case, but it was an annoyance. I finally settled on the foam tips, which were fairly comfortable, save for one caveat…

Which leads me to the singular bad point — the piece of foam that got stuck in my ear.

The foam ear tip is actually 2 pieces. There’s an inner rubber part which connects to the ear bud itself, then the foam is a separate piece that wraps around the rubber. Unfortunately the adhesive that was used to make the two stay together didn’t work, so when I pulled the earbud from my ear, the outer sleeve stayed put.

There I was, standing in the airport, using the audio jack to dig around, attempting to pry a piece of foam from my ear canal. It wasn’t my finest moment.

If this had happened a couple of years into the life of the Vortex Pro, I could have excused it. But it didn’t. It happened the first time that I used the Vortex Pros and that’s inexcusable. Yes, it’s a manufacturing defect, and those happen. But for a headset that retails at an MSRP of $150, this is a deal breaker.

Update: Moshi tells me that they’ve identified the problem, and they’ve fixed it. For anyone who has bought the Vortex Pro the company will be in contact to replace your tips free of charge.

At this point, I simply can’t recommend the Vortex Pro. I hope that the company fixes the foam defect, but even then $150 is really expensive for the headset. If it were around $100, I’d have an easier time saying that it’s worth your money, but right now a high price and that foam-in-the-ear problem leaves the Vortex Pro relegated to “another headset I won’t be using”.