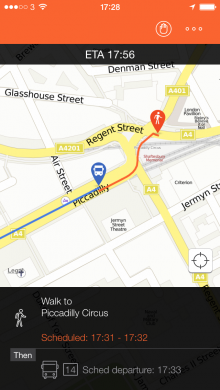 Moovit‘s crowd-powered public transport trip planner app for iOS has been fully revamped to bring a new look and feel in keeping with the design of iOS 7, as well as making it faster and adding new features.

The update was released today on the App Store and in addition to changing the overall appearance of the app – and ushering in a new logo – it also brings service alerts for real-time updates from transport agencies (including the option to subscribe to push notifications, where available) and improved step-by-step navigation.

This is the third major milestone version of Moovit app – often dubbed ‘the Waze for public transport’ –  since it launched back at the start of 2012. The Android build was last updated at the beginning of this year, but has yet to include the real-time alerts option now offered in the iOS version.