Yesterday, MIT’s news office officially announced the successful human tests for the first wirelessly controlled drug-delivery chip. The programmable microchip contains capsules of medicine, and is implanted into a patient. Medicine is then released according to whatever regimen was prescribed.

Professors Robert Langer and Michael Cima hope that the device will someday allow patients to receive consistent and reliable treatment without the painful task of daily injections. Further on into the future, the device could “help usher in a new era of telemedicine,” says Langer.

Langer continues, stating that “you could literally have a pharmacy on a chip. You can do remote control delivery, you can do pulsatile drug delivery, and you can deliver multiple drugs.”

In the Science Translational Medicine study, the researchers measured bone formation in osteoporosis patients with the implants, and found that it was similar to that seen in patients receiving daily injections of teriparatide. Another notable result is that the dosages given by implant had less variation than those given by injection. 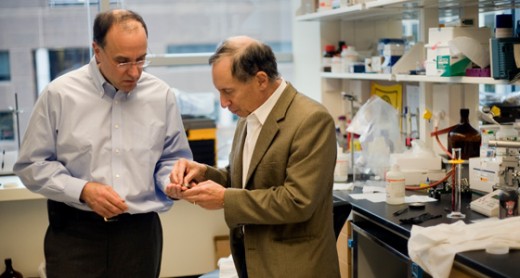 The project has been in progress in a number of forms since the mid-1990s, and it’s finally making true strides. I’m genuinely excited about the concept of resolving painful and inconvenient prescriptions with an embedded device.

That said, it is always scary to see such a sensitive service controlled over the air. The risks and potentially tragic results of hacking such a device means security needs to be top-notch. Also, any malfunctions could be disastrous, since so much medication would be packed into a single implant.

Here’s to technology, being scared out of our minds by it and loving it — all at the same time.