The winners of the 15th anniversary edition of the Imagine Cup were just announced in Redmond this morning. Xglu from the Czech Republic developed an app that gives children with diabetes a cheap, easy and reliable way to measure and monitor their glucose levels. Instead of lugging around bulky batteries and embarrassing looking medical equipment, kids have small, cute attachment (about the size of a business card) which links to smartphones and takes accurate measurements in seconds.

Not only that, but the whole process is turned into a game, where children collect strawberries as they complete what – let’s face it – is not traditionally a fun task, i.e. pricking your finger and taking blood. And because all the data is loaded automatically to the cloud, it gives both children and parents a much better way to monitor their condition in the long term.

And this was far from unique to Xglu, as this year’s Imagine Cup was very much a cloud-first competition, with all teams required to incorporate it into their projects and $125,000 Azure grant awarded to the winner in addition to the $100,000 prize.

Over the last fifteen years the Imagine Cup program has involved over two million students from over 190 countries, but this is about much more than a bunch of clever ideas competing for a cash jackpot. After two days of watching impossibly clever young people pitch and demo every kind of tech, it became pretty clear that they – and their hosts – meant business.

This is not an accelerator, and these budding entrepreneurs are not officially competing for funding (although doing well here certainly won’t hurt their chances) but the focus is on taking ideas from concept to market, and asking the tough questions about how do you create value from a product, as Anthony Salcito – Microsoft’s Vice President of Worldwide Education – explained:

These ideas are enabled by real needs, and we want to move beyond specific narrow solutions towards those which have a much broader impact.

Even the more trivial-seeming ideas showcased uses of technology that could have wider applications. NeuroVoice, for example, at first glance is a rather amusing voice filter app designed by 3 Japanese students that allows you to hear Bill Gates delivering a serious speech on the importance of vaccination in Arnold Schwarzenegger’s voice.

It works pretty well for a prototype (as you can see from the video below) but although you don’t need to look further than Snapchat to see the potential for entertaining filters, the voice recognition and manipulation technology being deployed here could prove useful in a host of other applications as voice commands become much more prevalent in the way we interact with technology.

The same applies to the Russian entries which used facial and image recognition APIs to determine if a student was bored with their lecture or even decide whether someone had too much to drink and should be prevented from driving.

Small problems often add up to a lot of wasted time; A point that the team from Morocco – who had invented a solution to help match drivers with the nearest available parking space – drove home when they told the audience that the average Parisian will lose a year’s worth of their lives looking for parking spaces.

One thing I found rather refreshing was seeing that different teams were often working on very similar projects. There were two apps (Blink and Orai) which offered personalized feedback to improve a user’s public speaking skills and at least 3 teams (From Brazil, Mexico and the US) focusing on analysing and monitoring water quality, which can have high impact on farming, aquaculture and disease prevention. At the end of the day that’s a much more accurate reflection of how the tech ecosystem actually works. It’s not so much about coming up with a unique idea, but pushing past that “Eureka” moment, putting in the hard graft, and executing it in the real world.

As the winning entry indicates, one of the biggest trends to emerge from this year’s cup was healthcare applications and platforms that helped users diagnose and manage chronic conditions – from a smart urine bag that detects early signs of renal failure to an app that advises osteoporosis patients on the best way to take their medicines, exercising and even gives tips on warding off depression.

Gamification and IoT also featured in a lot of those apps, such as the one designed by a team from Sri Lanka which linked a wearable to a game to teach asthma sufferers the correct way to do their breathing exercises. Bubu Digital from Brazil built a smart pacifier that let parents monitor their child’s temperature, while a Polish team called Idea Hunters collected similar data through the baby’s clothing.

What is really impressive is how well the students’ projects work even at prototype stage. PulsePal, developed by Princeton University students, uses an algorithm and the in-built camera on your phone or laptop to monitor your heart rate, and during my demo it only took a few seconds to map onto my face and churn out accurate readings, beaming the data straight to the cloud.

There were also many groups coming up with tech solutions to help people with disabilities: GlovEye from Hungary converted any text into Braille, and a team from Japan made a smart white cane device to help navigation. One of the most impressive demos in the batch, however, was an App called Minerva developed by a team from the Philippines called Opticode. Point the app at pretty much any object, and it describes it to the user in any of 25 languages.

Other honorable mentions go to Team Nash from Argentina, which reached the final four with their ResCue app that created an autonomous drone network that flies over disaster zones, capturing pictures and sounds, and then used artificial intelligence to deploy rescue workers more efficiently.

I also have a soft spot for anything that empowers people to take a more active role in the democratic process; Indonesia’s Cimol, for example, built a Hoax Analyzer to identify and combat the proliferation of fake news, while the Brazilian Students at Stanford had a tool called Cheque that kept track of a politician’s voting record and allowed voters to give them direct feedback on whether they agreed with each decision. If ever there was a time we needed technology to step up to the plate and empower voters to hold their representatives to account, it’s probably now.

Artificial Intelligence and Machine learning featured heavily in a lot of this year’s entries, which fits with the fact that Microsoft invested heavily in enabling developers to plug AI functionalities more easily into their applications.

Another big trend in the entries was of course Mixed Reality, including the runner-up entry from Oculogx – a HoloLens application that helps warehouse workers to find the shortest route to picking goods, with in-built barcode scanning that lets them check they’ve got the right order, hands-free and in in real time. 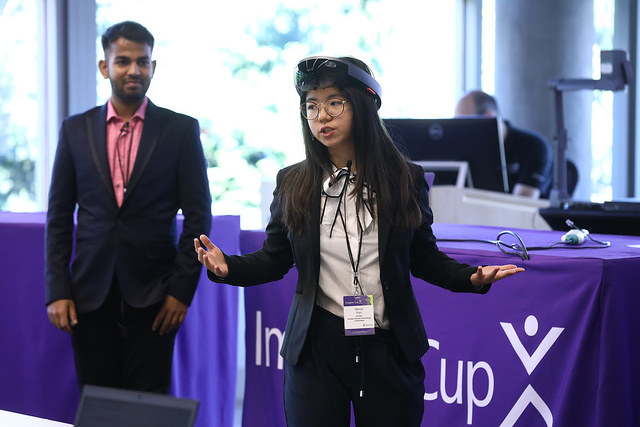 Since this converts into a 37% improvement in the speed of picking orders and accuracy, it’s easy to see why Oculogx already secured Walmart as an early partner for a paid proof of concept. Like many large corporations, they’re keen to capitalize on the huge efficiency gains that Mixed Reality technology can bring.

“These people are natural makers and creators, and they want to make a difference,” concludes Salcito. And if this year’s batch of young entrepreneurs is anything to go by, our future is indeed in very good hands.