Microsoft, Spotify and music intelligence firm The Echo Nest have joined forces to create Mixshape, a visual tool that automatically sorts playlists based on the properties and moods of individual songs.

Mixshape is built on top of The Echo Nest’s technology, which is sometimes called the “big data of music”, while Spotify provides the playlists, which maxes out at 300 tracks for the tool.

Microsoft’s part in the project involving helping the tool be optimized for Internet Explorer 10 and the Windows 8 touch interfaces. We tested the Web app on a Windows touch device and enjoyed the tactile interface. Mixshape also worked on a Mac running with Chrome, though it wasn’t quite as engaging.

The tool lets users manipulate a movable shape in order to rearrange a playlist based on tempo. You can choose from settings such as romance, party, exercise and work, choose a line that determines the pace of the playlist. 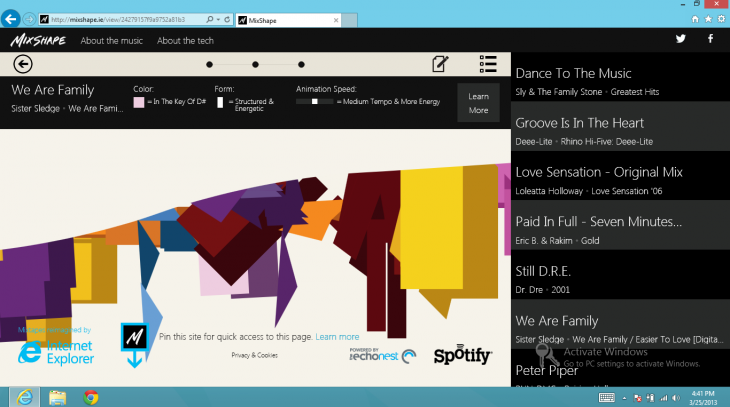 Once you’ve generated a shape, you can then play around with it to move things around. Zooming over individual segments of the shape will show the specific track information that is being demonstrated visually (color represents key, form/shape relates to the feel, and animation speed is connected to tempo and energy). When you’ve decided on a shape, you can export the reordered playlist back to Spotify.

Mixshape is launching first in the UK, but it will be accessible wherever the Spotify service is available. Music junkies that have already compiled plenty of Spotify playlists should find the tool useful. Those of us who don’t can use Mixshape’s pre-made playlists to still have some fun.