With Oculus Rift closing in on the consumer market, and Google Glass making steady strides, reality augmentation is becoming increasingly embedded in our lives. But typically, augmented reality (AR) has been centered around visual senses.

Microsoft’s one company that has been working on 3D audio technology for a while, enabling headphones to create an illusion of sound that’s emitted from a very specific location. As MIT Technology Review previously reported:

“I put on a pair of wireless headphones that made nearby objects suddenly burst into life. A voice appeared to emanate from a cardboard model of a portable radio. Higher quality music seemed to come from a fake hi-fi speaker. And a stuffed bird high off the ground produced realistic chirps.As I walked around, the sounds changed so that the illusion never slipped as their position relative to my ears changed.”

Used in conjunction with something like Oculus Rift, this technology has the potential to augment the visuals of the virtual reality realm. But the use-cases extend far beyond that of gaming and leisure. 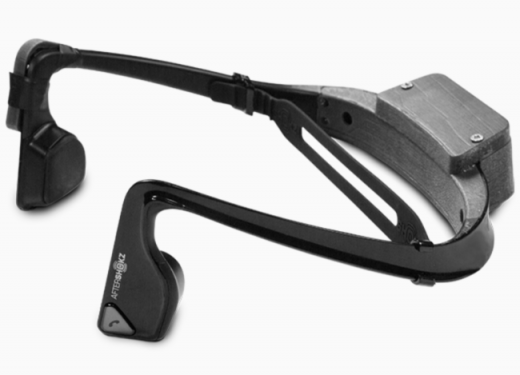 Microsoft is piloting a project in the UK to investigate the potential benefits of its 3D audio technology on those with visual impairments.

Using a set of bone-conducting headphones placed around the back of the wearer’s skull, a mini network of indoor and outdoor beacons work in tandem with a smartphone to enable the user to ‘hear’ their way around an area.

The Bluetooth beacons are fixed to physical objects which then communicate information back to the walker. It’s effectively creating what it calls a “sensor-boosted physical environment” and a 3D soundscape with verbal cues – this may be GPS navigation, bus time arrivals, or even tourist information.

You may be wondering why Tesco’s help has been sought here. Well, for the pilot, users can be guided to the aisle they’re looking for.

While it’s still very much in the early research stages, it’s interesting to see this technology being used out in the wild to solve real problems. In this case, it’s being used to bring enhanced mobility and independence to those who need it.

Check out the ‘Independence Day’ video Microsoft produced to demo the technology. Meanwhile, you can read more about the pilot here.