Have you heard of the Mexican football team Jaguares de Chiapas? This First Division club recently launched an innovative social media initiative by replacing players’ names on the back of their shirts with their Twitter handles.

This isn’t the first time that soccer and social media have collided, as many Premier League stars use Twitter and Facebook to interact with their fans. However, most initiatives so far have come from players themselves, rather than from their clubs.

According to Simply Zesty, their clubs haven’t always supported them, and sometimes even banned social networks altogether. The situation seems to be quite different at Los Jaguares. Indeed, the club is fully supportive of the stunt and even added its own Twitter handle to the front of its players’ shirts. 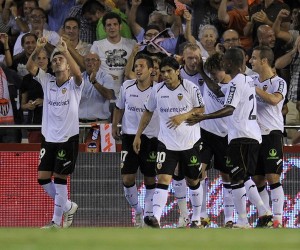 Although the initiative is a first in Mexico, it’s not completely new; in fact, the Spanish club of Valencia had already done almost the same last month. In the absence of a sponsor, the club had used its own Twitter handle on the front of players’ shirts in lieu of a sponsor’s name.

While Valencia’s campaign didn’t involve a sponsor, Los Jaguares’ shirts combine both worlds and promote their sponsor’s Twitter account at the same time as their players’. As you can see on the picture, the club is sponsored by the beer brand Cerveza Sol, which largely benefits from this marketing stunt.

However, it doesn’t seem to have converted that well so far: the official Twitter account for the club only has 10,000 followers as we write. As for its Colombian striker Jackson Martinez (@jacksonm9), the two tweets he has posted only won him a mere 569 followers. Quite a long way to go before catching up with Wayne Rooney and its 1.9 million fans.

One thing is for sure though: this stunt will certainly have increased the Mexican club’s overall visibility – online and offline.

What do you think of this kind of initiatives?