The great butlers of fiction have been well mined by tech companies in search of a name: P.G. Wodehouse’s Jeeves was co-opted for that once popular search engine; Alfred is doing double duty as Batman’s trusty man servant and a beloved Mac productivity app.

Where did that leave a Chicago-based startup with a virtual assistant in need of a name?

Geoffrey from The Fresh Prince of Bel Air was still up for grabs, but spellings variations could provoke SEO suffering. Its first choice – Unclutter It (complete with a .it domain) – is now so embarrassing that I practically have to prise the confession from the company’s CEO Aaron Franzin, who visibly cringes at the memory. 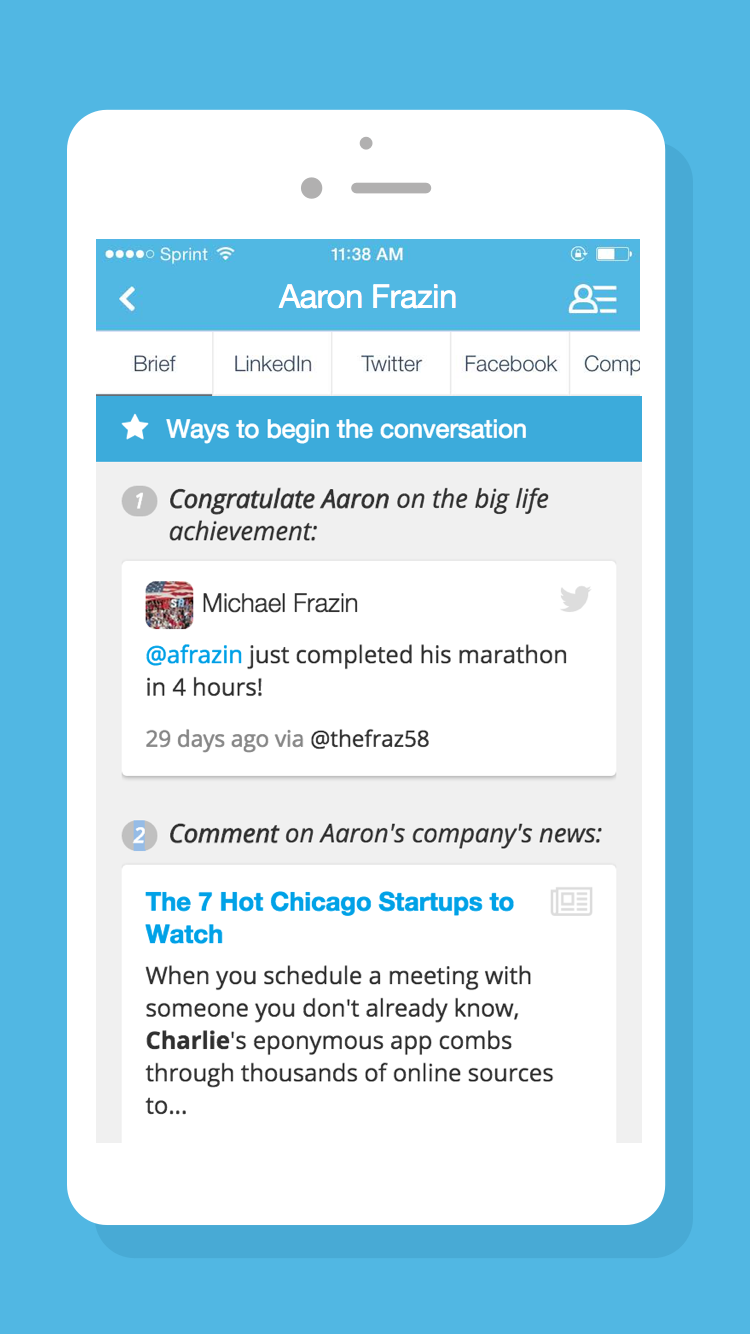 When Franzin and his team were first building the app, which taps into your calendar to provide in-depth research on people you’re due to meet, they kidded early clients that the assistant was flesh and blood, working through the night to prepare the briefing material:

We told people that Charlie was real and that they could get information on their next free meetings for free. What they didn’t know was: We did the research by hand. Almost all of them started referring to Charlie as their assistant and the name just stuck.

And while the Charlie that nestles in your browser and, from today, on your iPhone, is now powered exclusively by algorithms, its approach to getting you up to speed ahead of important appointments has a strong basis in human behavior:

Prepared for when you panic

Franzin says he wants Charlie to cover that “oh shit moment” when you have an important call or meeting looming up before you and feel unprepared.

I’ve been using Charlie hooked up to my Google Calendar for a few months and the newly released iPhone app for the past few weeks and that’s exactly what it does. When you’ve left it late to gin up on a new contact or their company, its briefings are that one-sheet overview you desperately need.

The information provided goes way beyond a simple Google search, digging deep into social profiles and connections, as well as media coverage, to give you useful insights.

Charlie picks and chooses from the available information. It learns what’s important. If their company has had something big happen recently, it will make sure to highlight that. It does that with the person too – it will put out the highlights of their year and also look at what they’re friends are saying.

The app achieves that through a combination of key word and sentiment analysis combines with natural language processing. Franzin says Charlie’s engine has processed over a billion data points so far and researched over four million meetings.

The service scans your calendar once every 30 minutes – the optimum period to both managed the startup’s resources and catch updates to your schedule – and delivers its analyses with plenty of time to spare before any given appointment starts.

Charlie’s convenience combined with the usefulness of the briefings it produces mean it’s fast becoming the secret weapon for teams at some of tech’s biggest names.

One person there signed up six months ago, then it spread to five, then 20, then it was 100 within a month. Now there’s over 500 reps at Salesforce using Charlie on a daily basis.

The obvious next step is for the app to start sharing information among teams and tapping into internal data sources as well as external ones. Franzin acknowledges that’s in the works:

We keep getting whole sales teams asking for collaborative functions. The ability to share notes comes up all the time. People ask us all the time for functionality in their CRM and we’ll add that eventually. If a VP of Sales establishes how they want their team to prepare, we’ll be able to factor that in.

There are spectres at Charlie’s feast though. Their names are Google Now, Siri, Cortana and Hound. But Franzin is bullish about the threat from other virtual assistants.

The company raised a $1.7 million round from Chicago-based investors last year and has a 10-person team which includes AI experts and mathematicians. Franzin’s argument for its ability to stand alone is passionate and convincing:

Our goal is to build this as a sustainable company. Technology’s made it so we’re meeting with more qpeople than we can handle – online and off.

The calendar is in Google’s hands, but it’s a different thing to analyze data points and offer a briefing on your upcoming meetings.

Suggesting what to talk about or mention is a very different challenge to saying that your plane is going to be late. It’s a problem outside the bounds of Google Now or Siri.

They’re trying to be a very broad assistant for any event in your calendar. We’re about digging up important information for key meetings.

Despite introducing a paid option, Franzin says Charlie will always offer its free tier, which should suit a lot of users.

I believe him when he says he can see an independent future for his companybut with Microsoft on a tear recently, gobbling up startups including Wunderlist and Sunrise, I can see Charlie making its acquisitions list. Interest from Google or even Apple is not unthinkable either.

And if those big beasts came knocking, would Franzin be able or inclined to resist? My Charlie briefing on him suggests he wouldn’t.

Read next: x.ai is building a virtual email assistant that can schedule meetings on your behalf