As a tech journalist, I’m no stranger to negotiating over meetings. With endless requests to meet for coffee, lunch or the quick phone briefing, there’s quite a lot of email back-and-forth to pin down an actual date and time.

“Subject: Meeting up next week?

Hi, I’m X and I represent X. We’ve got our CEO in town next month and were wondering if you had time for a quick catch up?”

From here I have to find out exactly which days and what times the person is in town and available, and then see if that corresponds with my own diary. While the meetings themselves are worthwhile and the process of setting them up isn’t exactly hard work, it is pretty time consuming if you do it often enough.

This problem is exactly what artificial intelligence company x.ai is hoping to solve with ‘Amy’, a personal assistant for the masses that can learn your scheduling preferences and arrange meetings on your behalf. 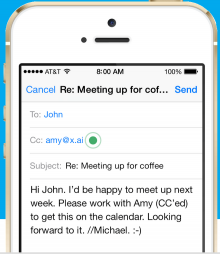 In essence, the system allows a user to simply copy (CC) their virtual assistant (Amy) into the email chain to let ‘her’ take care of the details. Once a date, time and location has been found that works for everyone involved, all you need to do is confirm the meeting.

So, in the example above, I’d respond to the initial email with something like “Hi X, I’d be happy to meet up for a coffee. Please liaise with Amy ([email protected] – CC’ed here) to find a time that works and I look forward to seeing you next week.”

From this point, the system would remove me from the email chain and email the other party a potential time and place to meet up. If that doesn’t fit with the other person and they suggest an alternate option, Amy then checks the feasibility of the suggestion and responds appropriately – either renegotiating, or by sending invites to both parties if the proposed meeting fits with my schedule.

And the best part of this is that there is nothing to download, there’s no sign-in and there’s no password to remember.

For anyone thinking that this sort of system can’t really be too hard to build, there’s a 10-strong team behind x.ai who would disagree with you. The complication of having a virtual scheduling assistant is that for it to be truly useful it has to understand your life far beyond mere calendar coordination, the company’s founder and CEO Dennis Mortensen explained to me.

Scheduling a meeting is rarely, if ever, a task of matching free/busy time with the other participants’ calendars. The two primary concepts that break that utopia of it just being a fairly simple engineering task of transposing one calendar on top of another are the personal preferences of each participant – which goes way beyond knowing that you don’t do meetings on Saturdays! Which I do, by the way, but only with new hires, and only engineers, and only if we exhausted other options, and if so, I’d rather do it at my apartment than the office, and best early in the day, unless they want to play a game of squash with me. Amy needs to know all that.

And secondly, the rather complex social dynamics that are built into meetings. As I emailed Jordy from Softbank about my new venture, at no point in the conversation did we talk about where to meet for a casual presentation, it was understood that it would be at his office. Amy needs to know that.

Clearly, to achieve this takes a bit more than just simply knowing when everyone is free.

To that end, the company has just landed $2.1 million in seed funding in a round led by IA Ventures, Softbank and Lerer Ventures to help it continue building its system out. Mortensen told me that he’s looking to hire another nine “science and engineering guys as soon as possible,” so that 10 man team will nearly double in size overnight.

Success isn’t going to happen overnight either, but Mortensen says he’s in it for the long-haul. To me, it seems like if x.ai was a hit, there are an awful lot of big tech companies that would want to snap it up, but an acquisition isn’t the driving force behind building the service right now, Mortensen assured me.

“I want to take this company to the end and have no immediate lust for an exit. I’ve done that. Multiple times!”

He has too. As COO of Indextools, acquired by Yahoo in 2008, and as CEO founder of Visual Revenue, which was acquired by Outbrain last year.

While it’s an interesting proposition, Mortensen recognizes that x.ai isn’t the first company to have a run at this particular problem, and makes no bones about the risks involved.

There are plenty who tried to solve this in the past and it almost resembles the Battle of Thermopylae. Lots of glory, but 300 smart, well-funded entrepreneurs before us died trying. We are different because we’ve accepted that this pain is not solved with YET another app. We are middleware and do not exist outside of conceptually being a human-like creature that interacts with my friends, colleagues and business contacts. Either we completely remove the pain [of scheduling] and have something which could only be done by humans yesterday OR we die!

Rather than provide the service as a native app or some other kind of technology integration, all you need to do to use Amy’s services is copy her into the email chain. It’s really this simplicity and lack of integration that sets it apart from others, and when quizzed over the security and privacy implications of having a virtual assistant schedule all your meetings, Mortensen wasn’t fazed.

This product is all middleware. There is no app, no website service, no other product delivery channel than the existing infrastructure for email. Every current security mechanism which we, as an industry, applied to keep this channel safe is inherited by us and weaved into the fabric of the product.

Privacy, on the other hand is of the utmost importance to us and we need to keep every single meeting and any dialogue along the way confidential and only between the two parties. An interesting thought experiment is one where you allow yourself to compare the privacy of having machines keeping secrets versus temporary office workers in traditional admin positions keeping secrets. Outside of this and when humans touch our data, it is immediately obfuscated; Michael turns into William. New York turns into Amsterdam. $100 turns into $17.

Right now, the company is in an invite-only beta stage, although it’ll be opening the service to a wider set of beta users at the start of August.

Mortensen says there will likely be three tiers at its official launch – free, professional and business – and that the free tier allows people to use the service for “a handful” of meetings per month. For more frequent users, or for businesses that want to host Amy on their own domain, it’ll be chargeable at an as-yet unspecified rate. Depending on how well the system works, and what it costs, it could end up being a small price to pay for the time it saves me in haggling over the details.