If you have multiple email addresses, IM accounts and social messaging services it can be hard to keep track of them all.

Bringing all this information together in one place is a problem that developers around the world are trying to solve (see Threadsy and Mozilla Raindrop for two examples). Today at The Next Web Conference, UK-based startup MailSuite has launched its own take on the ‘unified inbox’.

This cloud-based service will work with any desktop computer or mobile phone. Beyond simply pulling email, IM and Twitter and Facebook messages into one inbox, MailSuite features time management tools to help you work smarter. What makes MailSuite particularly interesting is that it uses Blackberry-style ‘push’ messaging to get all your messages to you promptly regardless of the computer or phone you’re using.

For example, you can set work emails to be delivered only during office hours and personal emails, Facebook and Twitter feeds only during lunch-times and after work. MailSuite can hold work emails over the weekend and have them delivered to you first thing on Monday morning. You can even filter certain messages to be delivered only to your mobile phone or desktop computer, depending on where you would rather read them. 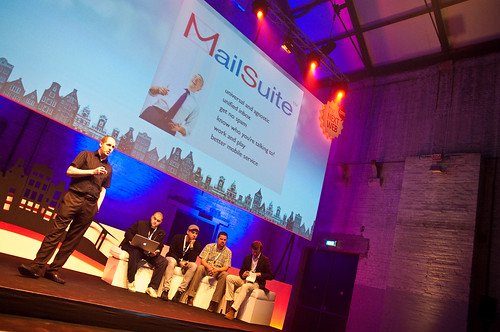 MailSuite operates as a push email service. This ‘SmartPush’ technology and file compression software works with all mobile phone networks and all modern handsets. This ensures a battery efficient service as a mobile phone connection is made to a local mast only when there is something to deliver.

MailSuite is claiming that in tests over a 3G network, MailSuite’s mobile file compression software increased download speeds tenfold and reduced email file size by around 95%.

MailSuite has security built in, with spam, phishing and virus filters operating in the cloud to ensure that you don’t have to deal with harmful messages yourself.

Essentially, MailSuite can be summed up as a Blackberry-style email service with IMs from multiple accounts, Twitter messages and Facebook messages all being pushed to the devices as well, but with the advantage that it works across any device without any software to install. We think this should give it broad appeal.

MailSuite launches in beta today with an Enterprise-class version due to follow this summer.