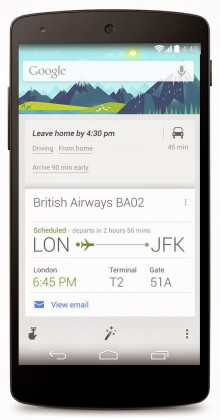 Whereas before flights and appointment cards would tell you the time it took to get there and your specified arrival time, the new Google Now gives more information and options about when you should be leaving. Based on three customisable metrics – where you’re leaving from, when you want to arrive and your mode of transport – the app can now offer more accurate recommendations for when to head out.

In addition, users in the United Kingdom and Canada can now trigger new voice searches with the command “Ok, Google.”

The feature was introduced for Android users in the United States last November, but it’s been mostly inaccessible for smartphone and tablet owners in other markets. Once you’ve updated the app, you’ll be able to launch the Google Search app or dive straight into the Google Now launcher and begin a voice search with the “Ok, Google” hotword.

It’s still possible to trigger this manually by tapping the microphone button in the top left-hand corner of the screen, but true hands-free search is a welcome addition nonetheless. While I don’t use voice search all that often, it’s good to know that it’s there when I’m cooking or have my hands full with the groceries.

In today’s update, Google also added support for reminders in French, Italian, German, Spanish, Japanese, Korean, Portuguese (Brazilian) and Russian. These are small tweaks admittedly, but over time they’ll only serve to push Google Now ahead of its fiercest rivals such as Siri on iOS and the highly anticipated Cortana assistant for Windows Phone.