With six days still to go on its Indiegogo campaign, the LithiumCard’s goal of becoming the “thinnest and only battery-powered HyperCharger” is well on track. Indeed, $140,000+ raised of its $30,000 funding goal is nothing to be sniffed at.

LinearFlux, the company behind the contraption, is currently gearing up to hit mass-production mode, with early backers possibly receiving their slimline chargers as early as this month. We managed to grab a hands-on with a pre-production prototype ahead of the official roll-out, and here’s how it looks.

At 53.9mm x 85.6mm x 5.5mm, the LithiumCard has the rough dimensions of a credit card – though it is markedly thicker. Indeed, it’s around 5 credit cards-thick, which is necessary to give this sufficient capacity, but will preclude it from being carried in many wallets – particularly ones with individual compartments designed for a single bank card.

At any rate, the LithiumCard is still compact and if it doesn’t squeeze into your wallet, it’ll certainly slip effortlessly into your pocket.

There are two cables built directly into the LithiumCard which can be stowed away when not required. There’s the main USB cable to charge the unit with, and either a micro USB or Lightning connector for Apple devices – this will depend on the version you’ve requested.

You then plug the LithiumCard into your device, push the ‘on’ button…and hey presto.

In terms of the amount of juice the LithiumCard will serve up, well, with a 1,200 mAh capacity, you may be disappointed. However, the core selling point here is the speed, with two amps of power promising up to a one percent increase in charge per minute. This will, of course, depend on the device – in my tests with a Samsung Galaxy S4, it was closer to two minutes for a one percent charge.

However, if your device is completely out of juice, lower-amped power packs can struggle to sufficiently feed higher-end devices, so the two amps here should serve you well in such situations.

“We didn’t want to do the same thing over and over again like everyone else and expect different results,” explains says a LinearFlux spokesperson. “We looked at what’s available today and there weren’t any ideal solutions, so we set out to make the thinnest all-inclusive HyperCharger. We needed it to charge faster than anything that is available in the market.” 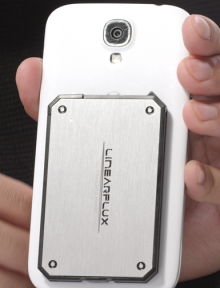 As far as all-in-one portable juice packs go, the LithiumCard is decent – though whether you would be willing to pay the anticipated $39.99-$49.99 retail price for something that likely won’t fully charge your device remains to be seen. But it does ship with a NanoStik pad, meaning you can temporarily glue the LithiumCard to pretty much any surface, including the back of your phone. Which is nice.

Whoever figures out a way to extend a smartphone’s battery life beyond that of a typical working day (without recharging) will be a rich person. Until then, the manufacturers behind battery-case combos, standalone juice packs, and compact batter-powered gizmos such as the LithiumCard will be vying for your hard-earned cash.

Related read: The Fluxmob Bolt: A tiny wall-charger and backup battery that packs a punch