Genius, a unified platform created by Merchant Warehouse, integrates a number of different transaction technologies, payment types and customer loyalty programs into a single device. It is a particularly useful solution for any store or business that wants to embrace digital transactions, but is afraid of having to pay out for a new keypad, app or scanner whenever a new competitor enters the market.

The support from Genius, according to LevelUp, is particularly important because of its ability to support new product campaigns and reward schemes.

“Paying with your phone, while super fun, is not all that valuable in itself,” said Seth Priebatsch, known as the ‘Chief Ninja’ at LevelUp. “The real draw for merchants is around being able to do cool things with mobile payments, like run campaigns that help your business grow.”

He added: “Merchant Warehouse is totally on the same page. Their Genius solutions give merchants the opportunity to capitalize on the full business potential of mobile payments, which is why integrating with Genius makes complete sense for us.”

LevelUp has been built by the team behind SCVNGR, a popular real-world gaming and location app. LevelUp users simply download the app to their iPhone, Android or Windows Phone device (it is currently unclear whether there is an alternative on BlackBerry, although the company’s website says you can contact them for a physical card) and then ‘link’ any credit or debit card. 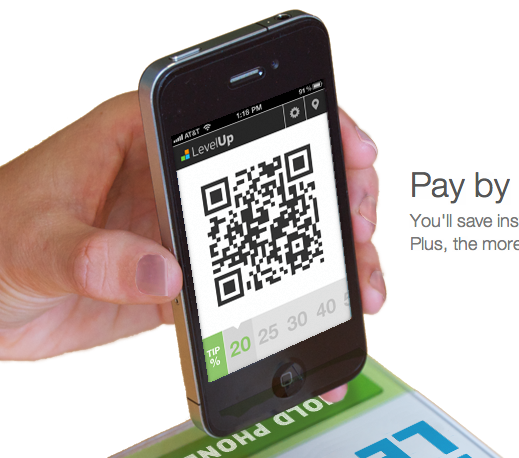 Users then bring up a unique QR code on the display of their smartphone in order to make a purchase. A push notification then includes a receipt and information about how much money they’ve saved.

As we’ve mentioned in previous coverage of LevelUp, the use of QR codes gives it a crucial edge over its competitors such as Square. Earlier in June SCVNGR raised $12 million from Google Ventures, among others, before then dropping all merchant fees associated with the scheme in July. The company is also backed by the likes of Balderton Capital, Continental Advisors, Highland Capital, Trnasmedia Capital and T-Venture.

Most recently, the firm announced Near Field Communication (NFC) support, as well as a piece of new hardware to bring it all together. Merchant Warehouse, however, believes that Genius will eventually come out on top as the ‘go-to’ platform because of its ability to tie all of these different payment concepts together.

“We’re at a really interesting and exciting point in the evolution of mobile payments. Merchants see value-add mobile payment networks like LevelUp as a complete business solution,” said Henry Helgeson, CEO at Merchant Warehouse. “This has driven the need for an acceptance platform like Genius, which unifies mobile payments and customer loyalty programs into one payment solution. We see it as an essential component for growth in the mobile payment industry.”

The integration of LevelUp with Genius will be shown at both company’s booths during Money2020 in Las Vegas (October 22-24), as well as Innovate 2012 (November 5-6).