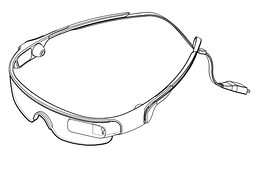 The Wall Street Journal’s Digits blog unearthed this image, which bears more than a passing resemblance to Glass. The filing, made earlier this year, says the “design is of a type [of glasses] with earphones integrated, allowing [users] to take phone calls and listen to music during workouts.”

Samsung declined to comment on the patent filing, but it clearly shows the company is at least floating the idea of a Glass rival. Given that it released the Galaxy Gear and has a curved-screen smartphone on its way, we don’t see a reason that this device wouldn’t get a consumer launch at some point.