Not enough technology is waterproof. Gadgets enhance your  life until you drop them in some water and then it’s all over. Kobo’s new ereader doesn’t let a little liquid stop you from enjoying literary delights.

The new Kobo Aura H20 is a waterproof ereader ready for reading in the bath, at the beach or floating on an inflatable in a pool. It continues Kobo’s annual premium ereader launch. Last year the company introduced the Aura HD with its best-in-class display.

This year’s premium ereader has the same resolution found in last year’s model (265 ppi), but it has an updated 6.8-inch Carta E Ink display. The Kindle Paperwhite by contrast has a 212 ppi display. Plus, it’s waterproof for 30 minutes in water up to one meter deep. The whole package will set you back $179, $10 more than the regularly priced $169 Kobo Aura HD (it’s currently on sale for $149).

While the Amazon Kindle dominates the US ereader market as another cog in the Amazon ecosystem machine, Kobo has been making inroads in the international market and has a solid following in the United States thanks to high quality hardware. 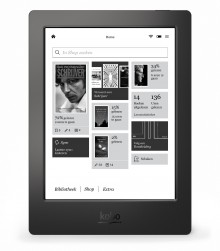 “We thought it (Kobo Aura HD) was a niche device and would account for maybe 5 percent of total sales. It was more like 25 percent,” Kobo President Michael Tamblyn told TNW. The company had tapped into a segment of passionate readers and with the Aura H20 hopes to do that again.

The company asked its customers where they read and many cited they read on the beach while on vacation and in bathtubs. It validated what its customers were saying with research and now you can take an ereader into the pool with you while sipping a fruity drink.

“We readily admit this is not a mass adoption device,” says Tamblyn. But if you’re an avid reader that enjoys being near or in water, this is better than placing your ereader in a zip-lock bag.

The Kobo Aura H20 is available for pre-order starting tomorrow now on Kobo.com and will be available in stores in Canada, the US, the UK, France, Spain, the Netherlands, Italy, and Germany on October 1.