Joe Stump is the CTO of SimpleGeo, a company that could be described as a S3 for location services. 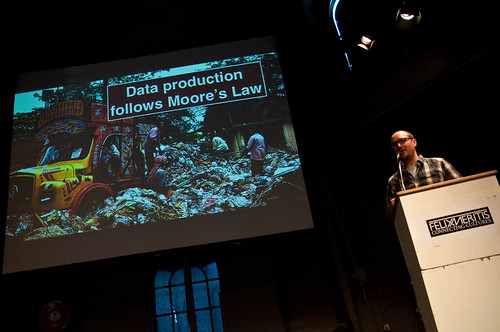 A few stats: Lat-long timestamp per user id: every 30 seconds users update their location which amounts to 1,6 petabytes per year. Location-based services amount to about 128.000 dollar a month in S3 costs: No wonder Twitter has problems scaling! 500m Facebook users produce about 37,2GB per minute.

As the production of data increases, its inherent value decreases. Content is no longer king, context is king.

Apple has sold 50m iPhones and each iPhone 3GS has 6 sensors. If we tie those sensors to location, what interesting things can we do with these sensors? What other types of sensors would be interesting? For example a thermometer, to measure the weather. Now, for the first time we have a realtime-based population density that can be a powerful dataset. 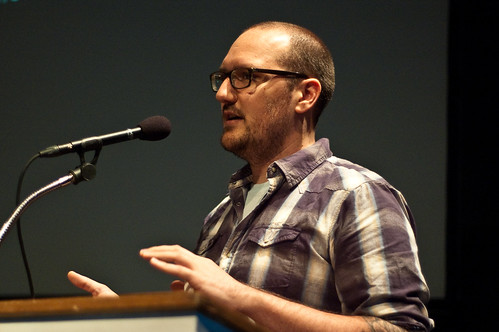 The guy who caught the MIT Blackjack Team (casino scammers) has 20 years of experience in studying how to merge multiple identities. His main strategy is cross-referencing enormous databases. He found that the two most important pieces of information to give away an identity are time and location. People cannot be in two places at a given time.

How do we make money from location? It is not a war (Foursquare versus Gowalla) but it is a goldrush. You know it is “the next big thing” when an old company applies the following: old company + x (where x is social/location). There is money in managing contacts but also in tagging things. We can tag things that are not in the physical world with a physical location (lat-long). This is what Gowalla is doing with its items.

A comparison between FourSquare and MyTown: Foursquare signs up 100.000 users per 10 days and has accumulated 22m check-ins per inception. MyTown signs up 100.000 users per day, does 25m check-ins a day, and averages 64 minutes per day of engagement. MyTown has more engagement, because virtual experience is following users where they go and there is interaction with other players. It shows that we need to move beyond the check-in which is just a broadcast of presence. We need to start building on a cohesive experience on top of that.

More photos from The Next Web Conference by Anne Helmond on Flickr.