January was a fairly eventful month in Latin America, with some last-minute announcements still coming out of Campus Party, whose latest edition is taking place in São Paulo. Here’s the news you don’t want to miss:

A couple of weeks ago, Apple announced that its education-related services iBooks, Textbooks and iTunes U Course Manager were expanding into new markets across the world, including several Latin American countries.

As we reported, the Cupertino firm is also working on bringing its first Retail Store to Brazil, and rumor has it on Brazilian sites that the grand opening of its Rio de Janeiro venue may take place in mid-February.

Brazilian media outlets also showed interest in the 10th anniversary of Google’s first social network, Orkut, despite the fact that its parent company ignored it altogether. This lack of attention isn’t exactly new: Orkut’s official blogs in English and in Portuguese haven’t been updated since 2012.

As you may remember, Orkut was the brainchild of Google employee Orkut Büyükkökten, who first launched the network on January 24th 2004. Its invite-only model is often pointed out as one of the reasons why its popularity was geographically uneven.

As a matter of fact, Orkut’s brand soon faded in most countries but the platform kept enjoying strong traction in India and Brazil, where it was a huge online phenomenon. However, it still ended up losing leadership in both markets to Facebook — in Brazil, the shift occurred in January 2012, and Orkut’s decline hasn’t stopped still then.

Despite what may look like a fall into oblivion, Orkut still has active users in Brazil — no fewer than 6 million people last December, according to surprising comScore figures quoted by INFO Online. In that context, it is quite a shame to see Google ignore them and display such indecisiveness. After all, it could be trying more aggressively to have all users migrate to its new global platform, Google+, but bridges between the two services are still scarce. 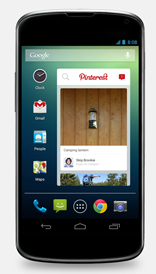 On the other side of the spectrum, Pinterest keeps on gaining users in Latin America, and its global agreement with Telefónica is likely to boost its growth. The partnership was first announced last October, and will see a Pinterest widget pre-installed on Android devices by participating Telefónica carriers. A few days ago, it was confirmed during Campus Party that Brazil’s Vivo would be one of these.

Chinese company Baidu also seems interested in targeting Brazilian Internet users at some point. According to Tech In Asia, a Brazilian Portuguese version of its popular search engine briefly went online this January before being taken down. Similar pages had also popped up in Thailand and Egypt as part of what a spokesperson for the company described as “internal testing.”

As for Facebook, it is reportedly set to open offices in Colombia. The information came from none other than Colombian President Juan Manuel Santos, who tweeted about his meeting with Sheryl Sandberg in Davos:

According to Colombian newspaper El Universal, the social network will also partner with Colombia’s ITC ministry (MinTIC) to foster the development of apps for lower-income citizens, rural areas and SMBs.

GoDaddy went to the media this January to officialize its ongoing Latin American expansion, which is part of the global push it had announced in 2013. In practical terms, this means that the registrar and web hosting company is now making custom versions of its site and local customer service phone numbers available in seven Latin American countries — Argentina, Brazil, Chile, Colombia, Mexico, Peru and Venezuela.

According to Phoenix Business Journal, GoDaddy’s 100 Spanish- and Portuguese-speaking customer service agents are working from the company’s headquarters in Scottsdale, Arizona, but the firm also plans to increase staff in Mexico, where its newly hired vice president of Latin America is based.

Still in Mexico, the Carlos Slim Foundation has launched a partnership with online education platform Coursera, VentureBeat reports. Their announced goal is to translate 50 English-language courses into Spanish by the end of 2014. As Milenio notes, Coursera is also hoping to further expand its catalogue of original Spanish-language courses, and already signed agreements with Monterrey Tech and National Autonomous University of Mexico (UNAM).

Brazilian mobile company Movile is expanding the reach of its kids’ content subscription service PlayKids, which is now available in 24 additional countries. According to the company, the app has already been downloaded 1.5 million times since its launch last year. Talking to GigaOM, Movile’s head of U.S. operations Eduardo Henrique also explained that his team has been working on new licensing deals to make sure that at least 8 to 10 shows are available in each territory.

Latin American e-commerce startup Club Point announced the expansion of its Gilt-like site into Colombia, where it plans to start selling products this semester. According to its founders, the private shopping club has already gained traction in Argentina and Chile, with more than half a million members.

Its next targets are Mexico and Peru, and according to its co-founder Juan Pablo Torras, the Start-Up Chile alum does not exclude external growth:

“We will be looking for different alternatives to open other markets in Latin America, such as acquisitions, mergers or alliances with entrepreneurs who already know the markets and allow us to accelerate the expansion,” he said.

High-profile Brazilian entrepreneur and TNW Conference Latin America 2013 speaker, Marco Gomes has announced the upcoming launch of Mova+, a new venture in which he will be involved in a non-CEO role while remaining at the helm of his main company, boo-box.

Mova+’s name is pronounced as “MovaMais,” which means “Move More” in Portuguese. Its purpose is both simple and ingenious: according to Gomes, it will encourage users to exercise in exchange of points in reward programs in Brazil that can be used to buy airplane tickets, products and other benefits.

Mova+ expects these benefits to be funded by employers, health insurance companies and other sponsoring brands. It is currently collecting emails through its landing page ahead of its launch, which is scheduled to take place in March.

Mango is a new Argentine startup which is developing “a reliable, secure and easy-to-implement solution for online and mobile payments.” Currently in private beta, its product is tailored for Latin America, where e-commerce is growing fast and where similar products are lacking.

While the company itself is new, the team behind Mango and its CEO Pablo Sanchez had already been working together doing client work, much of which was related to e-commerce. This background was undoubtedly one of the factors that helped Mango raise a first investment round from French VC firm Kima Ventures and angels such as Adrian Kolonski (Corporate Corp), Reuben Katz (GeekList) and Eric Friedman (Foursquare).

PlayVox is now available as a Zendesk app, its parent company Arcaris announced a couple of weeks ago. As we reported in 2011, this Latin American B2B startup has been a pioneer in bringing game mechanics to call centers’ workforce optimization software. Its new app means that PlayVox data can now be accessed from the Zendesk dashboard, an important feature for future and existing clients, such as Groupon Latam.

Argentine startup Comenta.tv has been acquired by US social media company Wayin for an undisclosed amount. As you may remember, Comenta.tv started out as a second screen monitoring company in 2011, and recently achieved momentum when it became one of Twitter’s six official broadcast curation tech partners.

With Comenta.tv’s team about to join Wayin, we can’t help but connect this acquisition to the recent wave of “acqui-entries” in Latin America. This term was recently popularized by TNW contributor Juan Pablo Cappello, who predicted that 2014 would be the year of the “acqui-entry” in the region.

While these deals may have drawbacks for investors due to fairly low valuations, they can also give entrepreneurs the exit they have been working for, while offering acquirers some unique advantages.

In most cases, a first-hand knowledge of the Latin American market(s) is a key selling point for these startups, but it is clearly not enough. For instance, StudentUniverse was mostly interested in WeHostels’ mobile expertise when it acquired the company last November. As investor Patrick McGinnis noted in a recent blog post, it was an opportunity for which the startup had thoroughly prepared, a case study that may inspire other entrepreneurs.

Other recent M&A in the media sector include the takeover of Argentine social media monitoring company SocialAd by pan-Latin American online advertising player Harrenmedia and the acquisition of HUNT Mobile Ads by Opera Mediaworks.

“When it comes to our growth strategy, what we want to do is start a strategy where we acquire companies that are doing really well, and where we can integrate the entrepreneurs. We’re in a position where we need the best talent possible.”

Tiger isn’t a newcomer in Latin America, where its portfolio already includes Baby.com.br, Decolar, Peixe Urbano and Vostu. Still, the potential size of this transaction is impressive, and confirms that big players are prepared to bet heavily on the long-term growth of e-commerce in Brazil.

As for VC firm Bessemer Venture Partners, it has acknowledged making a $10 million investment in a Brazilian business, but won’t reveal which one. According to PulsoSocial, it is also scouring for new opportunities from its São Paulo offices.

Cloud services Mandic has received a large capital injection from Intel Capital. The deal was announced at the end of December, but its exact size remains unknown beyond the fact that the firm’s rounds tend to range from $2 million to $20 million USD.

Online recruiting platform ViaConvo (a merger between Via6 and JobConvo) has raised R$800k (around $331k USD) from strategic HR investors, its previous backer Confrapar announced in a statement.

Minas Gerais’ state-backed accelerator SEED is currently accepting applications for its second acceleration cycle, which is set to start in May. The list of selected companies will be unveiled on March 17. The first round was officially launched in December, welcoming 40 projects chosen among 1,367 start-ups from 32 countries.

500 Startups’ Mexican chapter 500 Mexico City (formerly Mexican.VC) is also accepting applications for its next edition, which is set to start next spring.

As for liberal arts incubator Exosphere, it has already stopped accepting applicants for its second 12-week program, which will begin shortly in Chile. Despite a slightly new-agey tone, it is focused on startups and leadership, with the ambition to help “45 carefully selected participants (…) develop their entrepreneurial skills under the leadership of world-class advisors, faculty and mentors.”

As we reported recently, Argentina has banned home delivery of international online purchases in a bid to limit and tax foreign imports. As TNW editor Jon Russell explained, “deliveries from international shopping sites will no longer be sent to customers’ addresses, instead they must be collected from customs offices where a declaration of purchase must be presented. Citizens are permitted to buy $15 of goods from overseas tax-free, but anything beyond that will be subject to up to 50 percent tax.”

This new measure bears some resemblance to Venezuela’s restrictions on e-commerce. As local newspaper El Universal detailed, Venezuelans are assigned an annual quota for online purchases in foreign currency, whose amount for 2014 will be limited to $300 USD. In the meantime, the country also announced the creation of a Vice-Ministry for Social Networks, whose goal is “the greatest sum of happiness possible for each Venezuelan” (sic; translation ours).

To end on a more positive note, Uruguay has adopted a law on open software and open formats in which the state undertakes to give priority to free and open-source options over private-led alternatives.