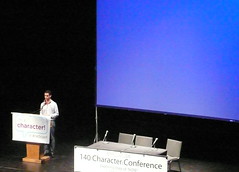 Today, at 140conf in New York Jack was the first speaker to talk about Twitter. I sort of expected some basic news (features, new design, business model?) but got none of that.

Jack talked about his ideas about what makes Twitter interesting and mentioned three words that are key to the success of Twitter: Immediacy, transparancy and approachability.

All decisions at Twitter are based around those three words. Jack mentioned some of the obvious examples of how cool and great Twitter is in democratizing the world. All in all it was an inspiring talk but didn’t tell us much about the future of Twitter or their strategy.

Jack finished his presentation not with a prediction but a question. Not the famous ‘What are you doing’ question but a more broad and interesting one:

“we have this brand new tool, an iteration of many tools we have used in the past. What are we building? How will we use this? Where will it lead us too”

It seems that Twitter is keeping an open mind as to what they want to accomplish in the future. Where Google and Microsoft had a clear goal (“organizing the world’s information” and “A computer on every desktop” ) Twitter keeps its options completely open.

Will they grow into nothing more than a chat service? So be it.
Will they become a tool focused on serving politics? Twitter will follow.

Although it surely is interesting and makes for an interesting ride I can help but feel slightly disappointed too. It would be nice to see a more focused and strong statement from Twitter.