Last night was the big night for many in the Internet world. It was the 16th annual Webby Awards, an award ceremony honoring excellence on the Internet, including websites, interactive advertising and media, online film and video, and mobile and apps.

“This year’s winners represent an amazing cross-section of the new and continuing trends we’ve seen across the Internet this year,” said David-Michel Davies, Executive Director of the Webby Awards.

Last night, The Webby Awards named Foodily the best food and beverage website, a hefty honor considering it was up against some tasty competition like Blenderbox and The New York Times. The winning platform presents recipes from around the web in a beautiful and clear way with a magazine-like experience and nifty Facebook integration, which makes creating and sharing food social.

In May of last year, Foodily launched a nutritional analysis feature that provides users with a comprehensive resource of detailed, instant nutritional insights into recipes from across the web. A few months later, the yummy, Facebook-friendly website debuted its free iPhone app, so you can share and recommend recipes on the go.

Since we’re such big foodies here at The Next Web, we caught up with Foodily’s staff to ask them for their 10 favorite recipes. Since this year’s Webby Awards theme is “The Year Distilled”, Foodily’s team chose a menu stocked with its favorite-alcohol infused recipes.

Each of the 10 recipes are from Foodily Tastemakers including Cat Cora, star of Bravo’s new show Around the World in 80 plates, who after just a month on the platform, has the same number of followers on Foodily as Twitter – and more followers on Foodily than subscribers on Facebook. While Foodily won’t divulge metrics for its site (other than the fact that on average, Foodily users spend 39 minutes a month on the site, which is more than Twitter, Google+ and LinkedIn), the startup is clearly having a good year. Hope this menu makes you want to celebrate too! 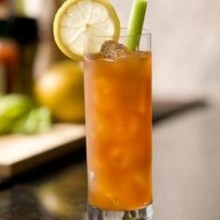 Cocktail by the Intoxicologist (this one is for the “non-winners”)

Cry Me a River

Palate Cleanser by Joy the Baker

Cocktail by Food Republic (this one is for the “winners”)