The Next Web has been at the Open Mobile Summit in London today finding out about the futures of mCommerce, digital media for mobile, monetization and being updated on what to expect from our pocket rockets in future.

One of the companies represented on a panel at the event yesterday is Rebtel, the company that wants to ‘take the phony out of mobile telephony’ and generally disrupt the market to try and save callers some money.

In a release today, the company says that over 18 million British smartphone users could switch networks if operators continue to prohibit over the top applications such as Skype, Rebtel and Viber. 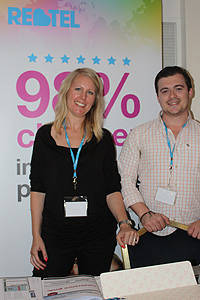 Part of the problem is that most smartphone users don’t realise that operators can block or limit access to these services. Though research by Opinion Matters, the company found that 60% of UK smartphone users are prepared to switch networks if access to voice over internet protocol (VoIP) services are slowed down or blocked.

Not everyone disagreed with the practice. 8% of people in the survey of more than a thousand UK smartphone users said it is the network’s right to stop users if it sees fit.

The depressing news is that most owners don’t know this. It’s likely to be in the fine print of a contract somewhere, but when did you last read your mobile contract word-for-word? Yeah, thought so.

Last year the Internet Telephony Service Providers’ Association (ITSPA) welcomed an Ofcom statement that said blocking is ‘highly undesireable’. The organisation itself believes that the blocking of internet services such as VoIP is anticompetitive and a detriment to the consumer.

Rebtel has a good reason to take up this cause. In 2008 the company was initially blocked in Germany before creating noise online to get the ban lifted. As so much time has passed, you’d hope that the fun and games over VoIP services might be done with.

There are a number of ways in which an operator may choose to penalise a consumer for using these services, it might be blocked, the service may be slow or the data costs might be much higher. It’s best to call your operator or check your paperwork to find out if this is the case with your own account.

Mobile operators have been accused in the past of slowing down the rate of technological change. Remember when you couldn’t text someone unless they were on the same network? Remember how long it took for SMS prices to come down?

It’s possible that moves like this are a last ditch attempt to make money out of alternative services before consumers move on. Often operators are stuck with older technologies and it is not always easy to keep up. Things might be better if they were able to offer similar services at a competitive rater rather than making things harder for the people who pay the bills.

“We keep a close eye on the factors that prevent us from delivering a fast and quality calling service to our customers.

“Traffic shaping is a much debated topic within the telecommunications industry and it has been brought to the attention of Berec (Body of European Regulators for Electronic Communications) who are investigating this further to understand the extent of traffic management practices and how it affects consumers’ use of services. Meanwhile, consumers are unaware of how operators are pulling the strings and are affecting how they use Skype, Rebtel or other over the top services such as WhatsApp messaging service.”

Rebtel is the world’s largest mobile VoIP company after Skype. It has more than 15m users worldwide and runs at a rate of over 1bn minutes per year. Users can try the service on smartphones, through a desktop application to make free or cheaper international calls.

As more of us are using smartphones without always checking the details, it’s worth having a closer look at any contract you sign. We all know this of course, but research like this at least gives us a clue on what to look for.