In August of last year we were treated to Y Combinator’s Demo Day and the unveiling of Kicksend. It’s an app, for your desktop or mobile phone, that lets you easily send files to any recipient’s email address or to your own desktop app. Today, that so-simple-that-mom-loves-it service gets a major upgrade to its mobile app.

According to CEO Pradeep Elankumaran, Kicksend’s new iOS app solves a few pain points, while saving you time. The first and arguably most important thing is that you can now send original-quality photos over 3G. Typically speaking, anything that you send over 3G is going to be compressed. While that’s great for data savings, it’s not so hot when you’re trying to get the killer quality that some of our phones have today. 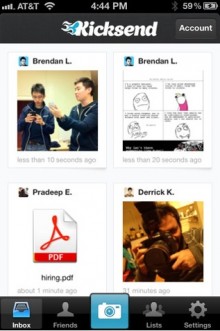 But what if you have a set of photos that you need to send? Previously, you’d have to queue up each one individually. Now, you can send up to 30 photos at a time in full quality, again over 3G or WiFi. Need to send multiple batches of files? You can do that too.

Of course there are options available within Kicksend to do photo compression if you’re so inclined. The team has taken a bit of time to finely tune those compression settings, however, so you should end up with better results than you might see from a native photo transfer via your phone.

“Couple all of these changes with the features from earlier, and we feel that we have the best way to send photos from the iPhone.”

Now, couple that powerful photo transfer ability with the fact that you can send any type of file to anyone and you’ll better understand why Kicksend has caught our attention. You don’t have to worry about getting a “file too large” warning, or bogging down your recipient’s phone. Kicksend simply notifies them that they have files waiting, so they can download them at their leisure.

Kicksend’s free plan lets you send up to 1GB of files each month. If you want some additional transfer space, there are a few steps that you can take, such as adding friends or downloading the desktop app, which will top you off with a few hundred megabytes. Of course there are also monthly plans for $5, $10 and $20 which open extended transfer and storage limits, as well as adding some nifty features.

Last, but certainly not least, is the fact that Kicksend manages to do all of this while keeping a supremely simple interface. There’s a Mac desktop client, a Windows version that’s available in beta, and an Android version of the app is already in progress. Sending files to someone who doesn’t use Kicksend? No problem. They’ll just get an email notification. Kicksend is that missing link for wireless, simple photo sharing that you’ve needed but never had.

➤ Kicksend, via the App Store