On Apple’s developer support page for the app store, the company has posted that 52 percent of iPhones visiting the App Store have iOS 8 installed.

The graph also shows that iOS 7 now resides on 43 percent of phones hitting the App Store as of October 27. The last five percent is everything else. 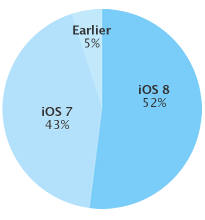 At the iPad event, CEO Tim Cook told the audience that 48 percent of iOS devices had installed iOS 8.

iOS 8 adoption numbers had seemed to have stalled after the initial launch. Jon Gruber and others believe that has to do with the size of the OS (which was a whopping 5GB) being the largest roadblock to upgrading. If you have a 16GB device filled with photos, apps and music, there’s a a lot of storage housekeeping that needs to be done before updating.