iON Cameras and Contour — both specializing in action-based POV and wearable video cameras — have announced that they are merging.

The companies have a combined global distribution in over 10,000 stores in 40 countries and will be in a better position to give dominant competitor GoPro a run for its money.

The Contour and iON brands will co-exist while offering a full range of connected and wearable cameras. Contour will continue to focus on products for the higher end of the camera market.

The newly merged company will invest in innovating camera hardware and software to continue letting people shoot, edit, share, live stream and store video and photo content in the cloud as simply and easily as possible. 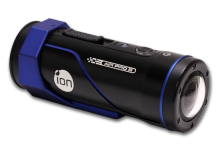 “This merger makes possible a broad line of cameras for multiple markets, with action sports being one,” iON CEO Giovanni Tomaselli told TNW. “Obviously, together, the two entities provide some competition to GoPro, both at the high end and low end of the sports market.”

“But note, the new company will not be limited to action sports, and iON already offers cameras focused on the home, automotive, lifestyle and the active wearables sectors. We’ll be extending into new market sectors, as well, both B2B and B2C,” Tomaselli said.

With the merger, Tomaselli will become CEO of the merged company; Contour’s current CEO James Harrison will assume the role of president.