This article was published on February 3, 2015

Imoji, the app that turns your selfies into awesome iMessage stickers, today quietly launched a messaging platform in a big update to the app.

Overnight, Imoji has transformed from an app that simply facilitated finding and creating stickers, into a messaging platform where you can directly send them to your friends.

This makes sense as the company would probably want to own the eyeballs of its users for longer, but what’s disappointing is one of the big selling points was that you could get stickers out of the app easily and share them to any service, including iMessage, which you can no longer do.

It’s easy to see why the company would want to do this, but it removed the primary reason I used the app in the past. You can message anyone from your address book and they’ll get a message to download the app. 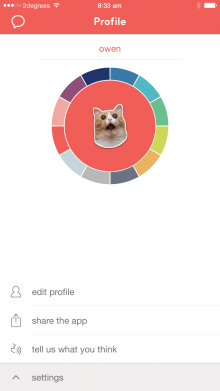 What worries me about Imoji’s pivot is that messaging is a crowded space; with apps like WhatsApp and Line being so prominent and having almost everyone onboard, convincing my friends to sign up to a new app just sounds tiring. Still, Imoji’s update is a legitimate push into being the place to go for sending stickers to your friends

The app also received the ability to perform image searches for things you want to create stickers of. If there wasn’t quite the perfect Miley Cyrus sticker available in the community, you can now perform an image search and create one yourself.