If you’re the type of person who saves memes and reaction GIFs to your iPhone camera roll, the new Imoji app for iPhone is for you. The app lets you crop photos and turn them into stickers to send your friends over iMessage.

Imoji has a simple design to it, but it’s confusing at first. To get that floating head feel on your stickers, you’ll need to drag your finger in an outline around the object you want to isolate. A zoom mode offsets the eraser so your fingers don’t cover up what you’re trying to do. 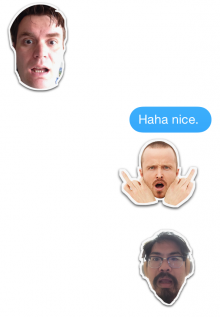 When you’re finished, you place your stickers on cards within the app and then drag the photo to the center to pull up the messaging window. Once you get the hang of it, it makes sense, but I still found the interface to be unnecessarily limiting.

Stickers you create will default to private, but you can also set them to public if you want to share your creations with the world. There’s a search box so you can find stickers that have been tagged with different celebrities, emotions and objects.

Imoji is a tad rough around the edges. It sometimes hung while I was trying to use it, and a few messages I sent never went through.

Still, the app is a ton of fun and I’m looking forward to seeing how it develops. There’s definitely an appeal to creating a card with a few popular reaction stickers so I can just drag and drop as needed.

I’d like to see support for sharing to other messaging services, as well. I didn’t find a save function, so I had to iMessage the sticker to myself and then save it to my camera roll from there.

Perhaps in the future, emoji and third-party stickers will have every icon you need to communicate, but until then, Imoji gives you the tools you create your own.